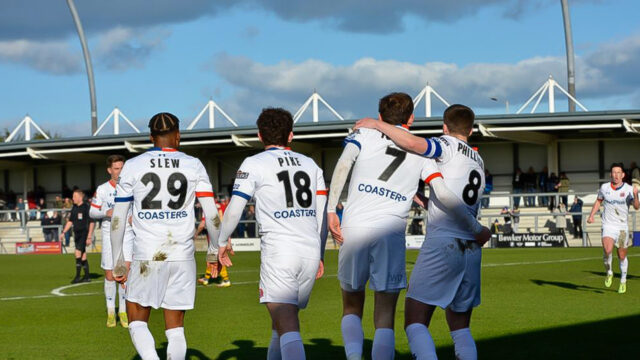 It was back to winning ways for the Coasters on Saturday afternoon with goals from Ben Tollitt and Nick Haughton securing three points over Bradford (Park Avenue) AFC at Mill Farm.

Tollitt sent the Coasters in at the break a goal to the good minutes before the half-time interval when he met Nathan Shaw’s delicious cross from the left to head in.

Bradford didn’t offer much in the grand scheme of things, and Haughton took full advantage of that when he got on the end of Jorome Slew’s pass to take it around George Sykes Kenworthy and slide an effort into the back of the net.

After the news of Jim Bentley’s departure from the Club on Friday afternoon, Nick Chadwick was placed in interim charge of the Coasters and made two changes to the side from Tuesday night’s defeat to York City.

The changes saw Jack Evans and Nathan Shaw drop out of the starting line-up to be replaced by Luke Conlan and Jorome Slew.

Despite a bright start to the game, the Coasters had to deal with the disappointment of losing Mark Cullen after he was stretchered from the field of play after landing awkwardly on his right leg.

However, there was work to be done, and Fylde, led by Nick Chadwick, continued their fine start to the game, with several chances for striker Jorome Slew, but Sykes-Kenworthy in the Green Army’s goal stood form to deny him.

Bradford P.A. were hoping to find some joy of their own through powerful winger Dylan Mottley-Henry, though his driving run resulted in him blazing over from around 35-yards out.

Slew was having the Coasters’ best opportunities of the half, and he almost found the opener when he cut inside on his right foot and fired inches wide of the post.

That opener did come just before the half-time whistle when Nathan Shaw crossed superbly to the back post where Ben Tollitt was waiting to nod in from close range.

Having the lead pumped some more life into the Coasters when brilliant combination play saw Shaw pass to Conlan, Conlan into Slew, back to Conlan, who found Haughton’s right boot, which eventually found the wrong side of the post.

A second was wanted and needed for Fylde, and the perfect opportunity presented itself from 25-yards out after Tollitt was tripped on his way through to goal.

Haughton stepped up and called Sykes-Kenworthy into action with an effort that looked seconds away from rippling the back of the net.

In a game that was dominated by Fylde, Slew looked certain to open his account in a white shirt when he met Conlan’s cross, though he managed to head inches over the bar.

The visitors still failed to threaten, and the Coasters took full advantage of that when a mistake by Sykes-Kenworthy saw Slew quickly on the scene to poke it away from him and unselfishly square to Haughton, who smashed in the Coasters’ second to secure the three points.