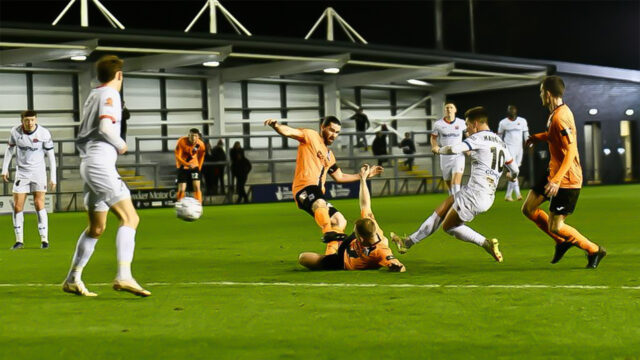 Fylde suffered their second defeat in a row as Darlington secured all three points with a 2-1 victory at Mill Farm.

Despite several Coasters chances, the Quakers took the lead on the stroke of half-time when Jake Lawlor headed in from a Jarrett Rivers corner.

Haughton managed to equalise minutes after the restart with a superb free-kick from just outside the area, but Kevin Dos Santos’ thunderbolt of a strike secured the points for the visitors.

Jim Bentley made several changes to the squad from the defeat to Brackley Town, with Jack Evans, Ben Tollitt & Jorome Slew coming in to replace Luke Conlan, Tom Walker and Luke Joyce.

15 minutes before kick-off, Bentley was forced into making changes to the team after Danny Whitehead and Walker pulled up in the warm-up, meaning Joyce made his way back into the line-up and David Perkins & Owen Robinson made the bench.

The start to proceedings was very quiet, with no real clear-cut chances for either side, though the Coasters were keeping the ball well in the opening stages.

However, as the game went on and the minutes ticked down, opportunities for the Coasters started to present themselves, with the first coming for Jorome Slew on his first start for the Club, who drilled an effort towards goal but into the hands of Tommy Taylor.

After finding pockets of space in and around the area throughout the game, Haughton managed to combine with Danny Philliskirk on the edge of the area, who took one touch and fired a shot wide of the post.

Haughton had a chance of his own after Nathan Shaw sprayed a ball across field to the midfielder, who drifted inside and looked to bend one into the far corner, though the effort went just wide.

Despite the Coasters’ pressure, the visitors took the lead when Rivers floated a corner to the back post where Lawlor was waiting to squeeze a header over the line.

After the restart, Jim Bentley’s men instantly drew themselves level after Slew was fouled on the edge of the area, and Haughton stepped up with a delightful effort into the top corner.

Chances were flowing once again for the Coasters when Haughton whipped a wide free-kick into the six-yard box for Tollitt to meet, though he headed just over the bar.

Though once again, after more Fylde pressure, Darlington took the lead through a spectacular Kevin Dos Santos hit from distance, which left Chris Neal helplesss in the Fylde goal.

There was time for two final chances for Fylde. First, Danny Philliskirk had the ball fall land at his feet for him to turn and shoot towards the bottom corner, though Taylor got down well to keep him out.

In the final stages, Haughton cut inside and crossed towards substitute Owen Robinson at the back post, who looked to have headed in to salvage a draw, but his effort crept inches wide of the post.