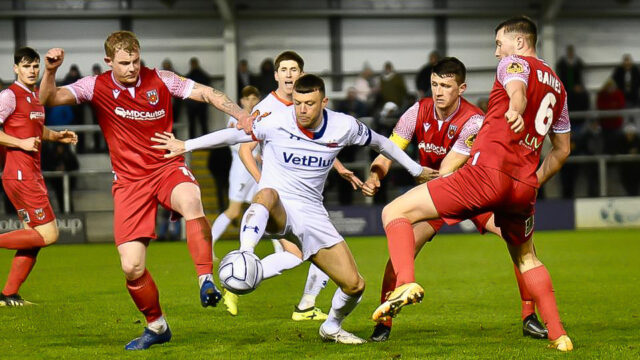 Despite Ben Tollitt pulling a goal back, the Coasters fell to a Boxing Day home defeat against Chorley FC in the Vanarama National League North.

Scott Leather put the hosts in front after 19 minutes when he poked in at the back post from a corner before Ollie Shenton curled an effort into the bottom corner of the net from just outside the 18-yard box.

Tollitt managed to halve the deficit seven minutes after the restart, but it wasn’t enough as the Coasters were left frustrated at the full-time whistle.

The Coasters were handed an early opportunity when Nick Haughton was brought down on the edge of the area. He picked himself up and forced Matt Urwin to palm his effort from the set-piece away.

It was a bright start to the game as Jim Bentley’s men came forward once again. Jack Sampson switched play to Ben Tollitt, who slid Kieran Lloyd in on goal, but he could only find the side netting.

Despite several chances for the Coasters, it was Chorley who took the lead when a corner was flicked to the back post from Mike Calverly into the path of Scott Leather, who poked into the net.

The Magpies then went close to a second after a cross had to be turned onto the crossbar by Bobby Jones, who then sprung to block Millenic Alli’s shot on the follow-up.

In an end-to-end game, Haughton went on a mazy run and worked enough space to hit a low-driven shot towards the bottom corner, though Urwin kept the effort out with his left boot.

However, the visitors doubled their lead when Cardwell held played up and slid a pass to Ollie Shenton, who curled in from the edge of the area.

The Coasters came out with a point to prove in the second half, and they pulled a goal back after Haughton slipped a pass into the feet of Tollitt. He turned and fired ferociously past Urwin in the Chorley goal.

Chorley were winning themselves a few free-kicks in the second half, and Tomlinson managed to find Cardwell at the back post with the latest, but he could only head wide.

Since grabbing goal, Tollitt wanted more, and after a few half chances, the wide midfielder had a great strike from distance gathered well by Urwin.

With five minutes of play left, Haughton turned and played a pass to Osborne, who flashed a ball across the face of goal, which the Magpies managed to eventually clear.

In the dying embers of the game, the Coasters should have been level. A corner into the area fell to Obi, whose effort was blocked. Osborne then went close, but again had an effort blocked, and Chorley managed to scramble the ball away to safety.