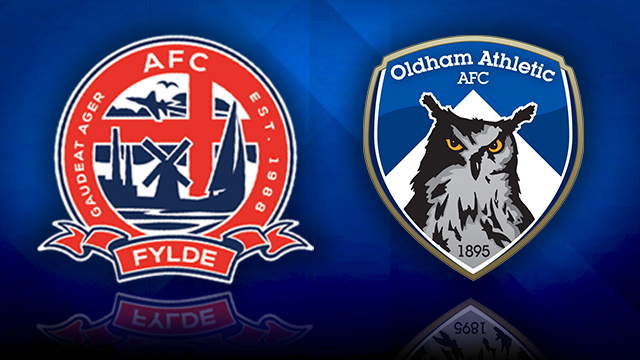 Stephen Crainey’s superb free kick was enough to give AFC Fylde an impressive pre-season victory over League One Oldham Athletic at Kellamergh Park.

Dave Challinor stuck with the majority of those that started at Runcorn Town in mid-week and they were more than a match for the Football League opposition.

The Coasters started brightly with Richie Baker trying a looping half volley which was eventually held by ex Blackpool keeper Chris Kettings in the Oldham goal.

The visitors started to show their quality and a nice passing move along the edge of the Fylde penalty area was only ended by McKay’s stray cross.

The first close call came after 13 minutes when a long ball to the Fylde defence saw a mix up between Langley and Dieng and the latter was able to scoop the ball up before it trickled over the goal line.

Oldham began to dictate the game and a header from Jake Cassidy went close to nestling in the bottom right corner and opening the scoring however it drifted just wide.

Brendan Daniels down the Fylde left wing caused a few problems for the Oldham fullbacks forcing three corners in quick succession although the Coasters weren’t able to take advantage of them.

Oldham midfielder Olly Banks tried his luck with a placed shot from just inside the box but Dieng in the Fylde goal was right behind it to save comfortably.

The referee blew for half time with neither keeper really tested.

The second half burst into life early on when Stephen Crainey bent a perfect free kick over the Oldham wall and into the far right corner from just outside the penalty area.

The Latics tried to find a quick response but disciplined defending from Steve Williams and trialist Josh Sampson prevented any major chances for the visitors.

Terrific play between Caspar Hughes and James Hardy saw the latter poke the ball under the Oldham keeper however Cameron Burgess was there to clear the ball off the line. The linesman also judged the young midfielder to be offside.

With just over ten minutes to go Carl Winchester intercepted Steve Williams in the Fylde defence but curled his shot well over the crossbar.

Lee Erwin had Oldham’s best chance when he was put through one on one with Dieng but the Fylde trialist keeper made a terrific save to deny the Scot.

There was to be no injury time as the referee blew for full time to ensure the Coasters made it back to back wins in pre-season for the first time.