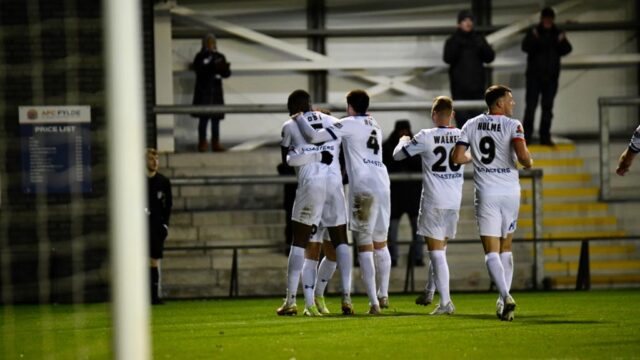 The Coasters booked their place in the FA Trophy Third Round after securing a 1-0 win over Gateshead FC at Mill Farm.

Emeka Obi’s 74th-minute header was enough to see Fylde into the next round of the competition in a game that sparked into life in the second half.

Jim Bentley made several changes to his team, with Liam Nolan, Jack Sampson, Ethan Walker and Jordan Hulme all coming into the starting XI. Nick Haughton started on the bench alongside the returning Chris Neal.

The game started quietly, with neither side having an opportunity in the first ten minutes of play.

However, when there was a chance, it fell to the Coasters and Jack Sampson, whose fantastic headed effort from a Luke Joyce free-kick was tipped over by Jacob Chapman in the Gateshead goal.

Jim Bentley’s side were let off as the game approached the 40-minute mark when Adam Campbell burst down the right and squared the ball to teammate Paul Blackett, but the linesman deemed him to be in front of the initial cross and offside was given.

The disallowed goal spurred the visitors on to wanting a goal that stood when Ryan Wombwell crossed towards Connor Pani on the penalty spot, who cleverly backheeled goalwards but into Bobby Jones’ hands.

After the interval, the Coasters had a spring in their step. Ethan Walker floated a ball to the back post where Kieran Lloyd was running in. He managed to get enough contact on the ball to cross towards the white shirts lining up in the middle, but Chapman got down well and claimed.

There were chances for both sides, and this time it was the Heed’s turn to attack as Robbie Tinkler met a free-kick from the left and forced Bobby Jones to spring across his line and make a superb save to his left.

Gateshead wanted the opener, and it was Campbell who was next to try his luck at goal with a curling effort towards the far post, though Jones got down and held well.

Despite Gateshead’s best efforts, the breakthrough came for the Coasters with just over 15 minutes left to play when Emeka Obi got above everyone to meet Nick Haughton’s corner and head into the top corner.

The Heed went in search of an equaliser to try and force penalties through Louis Storey, who swivelled and hit a fierce shot towards goal, but his effort went just wide.