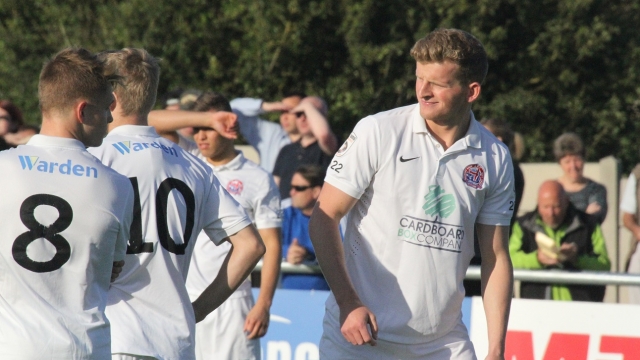 The Coasters claimed a famous win over their near neighbour rivals Fleetwood Town after a 44th minute winner from Dion Charles in a tame game to kick-off pre-season.

It was only the second time in history that these two sides had met and both times Fylde have come out on top. However, this one will mean more to The Coasters despite it being a pre-season friendly as it was a victory over a League One side who are well established in the Football League.

Both sides started nervously, as you would expect from an opening game of pre-season. Antoni Sarcevic had plenty of endeavour going forward for the Cod Army in the opening stages but his efforts were largely scuffed by the new centre half partnership of Dom Collins and Tom Hannigan. The away side had most of the ball in the first half as they tried to break down a resolute Coasters side that included new signing Matty Hughes.

It took twenty one minutes for the first shot of the game, as a long hopeful ball forward by the away side fell kindly for Sarcevic who blasted the ball wide from around 20 yards out. It was the first real shot in anger for either side. Straight after, McManus forced a corner for Fleetwood after good build up play, but Nathan Pond couldn’t convert as his header from the resulting corner was way off target.

The first real chance for Fylde came after twenty-six minutes as Matty Hughes ghosted down the left hand side for the home side and he almost found Danny Rowe but he couldn’t quite connect well enough and it went out for a goal kick.

Jamille Matt then forced a save out Ben Hinchliffe just before the half hour mark after the away side broke clear. The ball was fed to Matt by Sarcevic and Hinchliffe was down early to deny the Cod Army forward the opening goal.

Coasters favourite Richie Allen produced some of his magic in the midfield before he found Joe Mullen in space down the right. Mullen tried an audacious chipped shot to try to beat Moore in the Fleetwood goal but the ball sailed just over the bar. A Dion Charles corner for the home side found Tom Hannigan unmarked but his header was just wide. The away side went close again to breaking the deadlock through the abruptly named ‘Trialist A’ as his shot went just wide of the target.

The 44th minute saw the opening goal in the game and it came through the Coasters Young Player of the Year of last season, Dion Charles. A loose pass from a Fleetwood midfielder allowed Charles to run on past the Cod Army defence and find the bottom right hand corner to give the Coasters the lead just before the break.

Fleetwood changed their entire side at the break and started the second half much better than they ended the first with Sanogo and Proctor having chances to equalize, the latter denied well by Hinchliffe as he got down low to his left to keep the striker at bay. Trialist B for Fleetwood had a shot well saved by Hinchliffe in the Coasters goal as the away side looked to get back into the game although it proved to be to no avail.

A substitute trialist tried to lob Fleetwood’s sub keeper Chris Maxwell to double the Coasters advantage but his effort was comfortable for the Cod Army keeper, before Trailist B for the Cod Army tried his luck again as he mazed his way through the Coasters defence and hit a shot towards goal that was deflected for a corner before Richie Baker nearly put through his own goal after a defensive mix up at the back for Fylde.

Jack Sowerby hit a rasper at goal only for the ever impressive Ben Hinchliffe to palm away for a corner which was dealt with well by the Coasters defence. Tom Hannigan had an excellent game at centre half and marshalled the home defence excellently as they kept Fleetwood at bay and denied the Football League side from scoring.

Vamara Sanogo had a golden opportunity to equalize with eight minutes remaining but his glancing header went agonizingly wide for the Frenchman before another header on target for the away side was easily dealt with by Hinchliffe in the Fylde goal. Jamie Proctor also had a late effort but agian, Hinchliffe denied him low down to keep the score at 1-0 and then from the resulting corner, a deflected shot nearly found its way into the back of the net but the impressive Hinchliffe was there again.

That’s the way it stayed as The Coasters claimed a win against League One opposition.

Man of the Match: Tom Hannigan