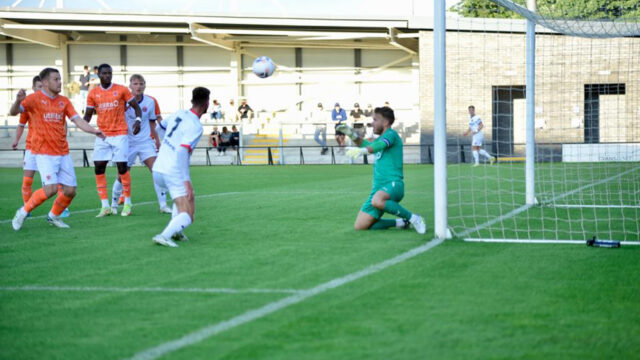 A good, hard-working Coasters performance wasn’t enough on Tuesday night when falling to defeat against Championship opposition after goals from Jerry Yates & Beryly Lubala secured victory for the Seasiders.

Yates managed to find space inside the 18-yard box for the opener and calmly slotted past Chris Neal before a thunderous second-half strike from Lubala sealed the victory.

A lively start to proceedings found both sides having opportunities at goal. First, Nick Haughton had a couple of chances to test Chris Maxwell from free-kick situations, but the ‘Pool shot-stopper saw the first away before batting the second out for a corner.

Owen Dale then had a chance to come forward and was left with a free effort on goal, which sailed over the bar before Joe Rowley found himself through one-on-one with Maxwell, only to be flagged for offside.

As the game went on and the 25-minute mark approached, the Coasters were finding pockets of space to exploit through Rowley and Haughton, with the latter having an effort comfortably gathered by Maxwell.

The game fell quiet for 15 minutes or so but came to life when Jerry Yates slid Shayne Lavery in behind the Coasters defence for him to lace an effort goalwards, which Neal did well palm away.

Blackpool continued to come forward as the interval approached, and it was Yates and Hamilton with the efforts at goal, with Yates dragging his shot wide and Hamilton forcing Neal into parrying away any danger down to his left.

However, Blackpool’s pressure told, and it was Yates who broke the deadlock when he found space inside the 18-yard box and slotted past Neal.

Blackpool started the second half like they ended the first, and they nearly had a second when Lavery and Hamilton combined cleverly inside the area, but the latter ended up firing well over.

The visitors soon had a second when CJ Hamilton burst down the right wing and found Lubala on the penalty spot, who smashed fiercely into the top corner, leaving new signing Tommy Simkin with no chance to his left.

Fylde kept going and pushed to grab at least one, which they nearly had when Sam Osborne took down a wonderful switch of play to set Trialist A inside the area, who made Maxwell push the effort away from goal.