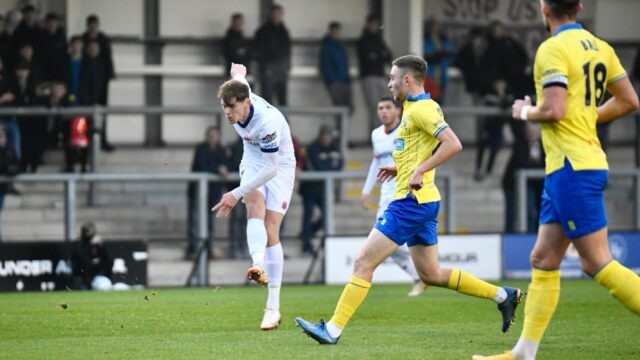 The Coasters fell to a narrow 1-0 defeat against Solihull Moors at Mill Farm on Saturday afternoon, as Jim Bentley’s men bowed out of the FA Trophy.

Jamie Stott’s unfortunate first-half own goal was the difference between the two sides, as Solihull Moors inflicted a first competitive home defeat for the hosts since March 2020.

Jim Bentley made one change from the Coasters’ narrow defeat at Darlington last time out, with Ethan Walker replacing Sam Osborne and Alex Whitmore also returning to the matchday squad following his return from a lengthy spell on the sidelines.

After a cagey opening 20 minutes at Mill Farm, the visitors broke the deadlock against the run of play after James Clarke’s cross inadvertently deflected off Jamie Stott and past the reach of Bobby Jones.

AFC Fylde had a chance of their own a few minutes later, Nick Haughton’s right-footed effort from the edge of the area called Ryan Boot into action before the visitors came close to doubling their lead moments later after Andrew Dallas’ effort went just wide of the post at the other end.

Jones was forced into action again just before the interval, tipping over Lois Maynard’s swerving effort from distance to deny Neil Ardley’s side their second goal of the game.

Jim Bentley’s side started the second half on the front foot at Mill Farm, with Ethan Walker having a good opportunity to bring the Coasters level. Ben Tollitt’s inviting cut-back found the Preston North End loanee inside the area after some quick combination play on the right-hand side, but the midfielder failed to keep his effort down from close range.

The Coasters continued to put the pressure on Moors and had another good opportunity just after the hour mark. Haughton’s corner was met by Stott and eventually fell to Tollitt, but the latter failed to hit the target from close range.

Solihull came close to doubling their lead late on in the second-half, but Callum Maycock’s effort was superbly blocked on the line by Emeka Obi.

Despite the Coasters’ late efforts in the second-half at Mill Farm, Solihull Moors held on to confirm the hosts’ exit from the FA Trophy.