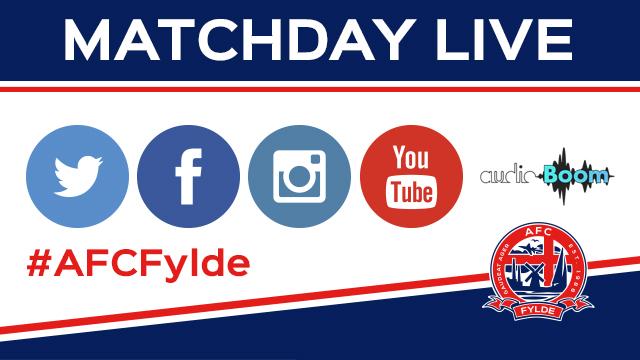 AFC Fylde travel to Skelmersdale United this Saturday afternoon for their penultimate pre-season friendly, with The Coasters looking to pick up their fourth win from seven matches.

The Coasters won their opening two pre-season fixtures 1-0 with victories against League One sides Fleetwood Town and Rochdale before travelling to Wales to face Airbus UK, where they were defeated 3-0 despite playing well. Bamber Bridge were next for Fylde and The Coasters managed to overcome their local neighbours and win 3-2 thanks to three first half strikes from Danny Rowe, Danny Lloyd and Richie Baker.

The Coasters then travelled to Cheshire to face Nantwich Town and came away with a 1-1 draw courtesy of a Dion Charles equalizer after Matty Kosylo gave The Dabbers the lead. This past Wednesday saw the latest pre-season fixture against a Bolton Wanderers XI end 1-1 meaning Fylde have drawn their previous two matches. Dion Charles scored the equalizer for a second successive match in which eleven-year-old Daniel Fryer took the reins after being given the chance to manage Fylde for a pre-season friendly.

Fylde have won three, drawn two and lost one of their games during pre-season so far and up next is a trip to Skelmersdale, a side who The Coasters have faced many times over the last few years in promotion battles throughout the leagues. The two sides met last towards the end of the 2013-14 promotion winning season for Fylde and The Coasters came away with a 5-0 victory. Skem won the return fixture on Boxing Day 2013, but Fylde came away NPL Challenge Cup winners after defeating Skem at Stockport County’s Edgeley Park in April 2014.

Matty Hughes had to come off with a toe injury in the Nantwich game and may not be fit to play yet, while Caspar Hughes will almost certainly miss this game as he had minor surgery on his nose earlier this week, but manager Dave Challinor should have a full team to choose from otherwise. Summer signing Dom Collins is likely to feature, whilst Coasters regulars Matt Blinkhorn, Tom Hannigan and club captain Bradley Barnes should all play.

Whilst Fylde have played six pre-season games so far, Skelmersdale have only three. They started with a 2-0 victory away at Prescot Cables before a 1-1 home draw last Saturday against Glossop North End. More recently, Skem beat Northwich Victoria 4-3 at home with former Coaster Jamie Rainford scoring for the home side. Skem kick off their season against Ilkeston in the Northern Premier League on August 15th.

If you can’t get to the game then you can follow live updates via the club’s official social media sites which will keep you up to date while every ball is kicked.
Minute by minute updates will be available up to the second on Twitter, while Facebook will have key updates and events plus you can interact with your fellow #Coasters fans.
Video previews and post-match interviews are available on You Tube and images will be also be added to our Instagram page so there is no excuse to miss out on the action, wherever you or we are!

Search for AFC Fylde on any of the above and you will find our official club accounts. Following the game the club website will bring you the full match report and reaction to the action.