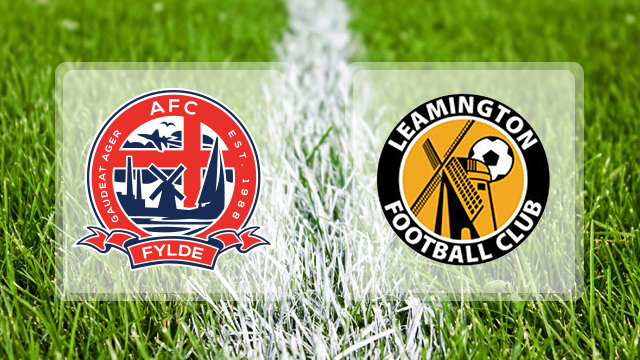 Second placed AFC Fylde host 14th placed Leamington in the Vanarama Conference North on Saturday looking to get back  to winning ways after a turbulent time of late.

The Coasters haven’t been firing on all cylinders in the last couple of weeks, as two of the last three league games have ended in draws while the previous game, against Hednesford Town on Tuesday night, was a 2-0 defeat.

However, Fylde will be looking to get back to winning ways this Saturday as they make the long trip down to Leamington to face The Brakes in what could be a pivotal match for The Coasters as they look to make up ground on first placed Barrow.

In truth, February was an average month for Fylde in comparison to previous months of the season, and although they didn’t get off to a good start this month by losing on Tuesday night, a win against Leamington would certainly increase the spirits on the Fylde Coast going into the final nine games of the season.

Boss Dave Challinor will certainly be preparing his side for this game with the objective of taking three points, and a similar result to the reverse fixture between these two sides would suit The Coasters, as Fylde picked up a 3-1 victory at Kellamergh Park on a cold night in mid December.

This game will be the second of four away games on the bounce for Fylde, and while their home form has been excellent this season, their away form has let them down at late but they’ll be looking to change that with an away win over The Brakes in two days time.

Leamington will be in good spirits after a midweek draw away at Chorley and last Saturday they beat Colwyn Bay 5-1 away. They’ve only lost one of the last six games in the league and that was a 2-0 home defeat in their last home game against Barrow.

A win could take the Coasters back to the top of the table if Barrow slip up but a loss for Fylde and a win for Hednesford could see Hednesford move to within one point of the Coasters in the league table.