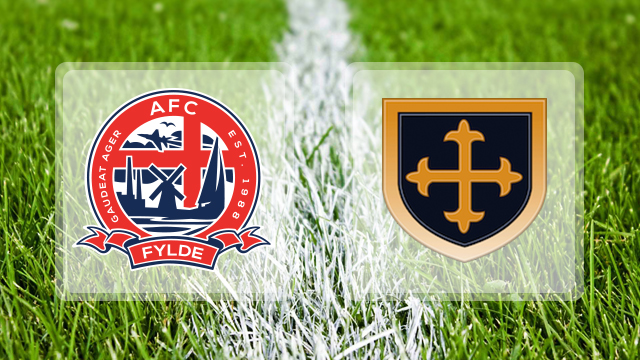 AFC Fylde are back in league action tomorrow night for the first time in a week and a half as The Coasters travel to fifth placed Guiseley in a Conference North fixture.

Before the defeat to Chorley at the end of January, Fylde were on an eight game winning streak and they’ll be looking to get back to winning ways against a Guiseley side that haven’t played since January 24th – a 5-1 defeat at Boston.

The Coasters didn’t play last weekend due to their away fixture at Hednesford Town being called off, while Guiseley’s game against Chorley was also called off on Saturday.

Fylde currently sit second in the league table with three games in hand over top of the table Barrow. Barrow have a two point lead over The Coasters, so a win tomorrow night in this game would go a long way to seeing The Coasters go back to the top of the league.

Guiseley are fifth in the league table, and have played just 25 games so far – one less than The Coasters but four less than top of the table Barrow. The Lions have 45 points compared to Fylde’s 58, and Fylde have won 18 times this season to Guiseley’s 13.

The Lions have only played three times since the turn of the year, with their only win in 2015 coming on New Years Day – a 4-2 victory at home to Harrogate. They’ve won their previous two home games and will be looking for another one to add to their collection tonight. However, The Coasters have won their previous three away league games and will be a tough nut to crack.

Guiseley will be boosted by the arrival of striker Liam Dickinson from Stalybridge Celtic in the past week. Dickinson scored for Celtic back in August when they defeated The Coasters 3-0.

Your support has been exceptional so far this season and we’d love to see it continue tomorrow night by coming along to support the lads once again.