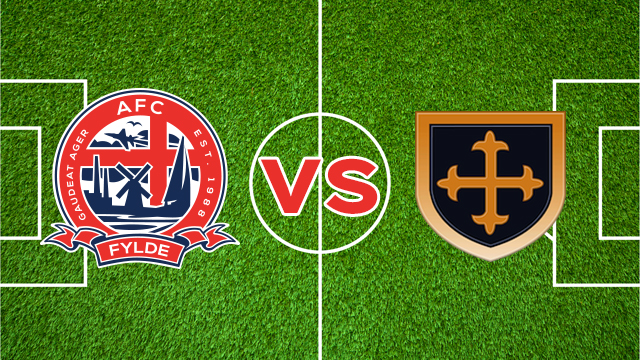 AFC Fylde go into their away game tomorrow at Guiseley sitting top of pile in the Vanarama Conference North table thanks to an excellent 3-2 Boxing Day win against Barrow.

That result for the Coasters means that it’s five successive victories in league and cup action for Fylde and they’re on a run of nine games unbeaten in all competitions after overtaking Barrow in the league table.

Its been a great December for The Coasters so far as wins against Stalybridge Celtic,Gainsborough Trinity, Leamington, Brackley and most recently Barrow a couple of days ago have seen Fylde win all five of their games this month and they’ve returned to the top of the Conference North table in doing so. Fylde face Barrow on New Years Day again.

The Coasters have scored 14 goals in their previous 5 games, conceding just 3. They face third placed Guiseley tomorrow afternoon, who are two places and four points behind The Coasters.

The previous result between the Coasters and Guiseley this season was the 0-0 draw at Kellamergh Park in August.

The Lions have won 12 of their 22 games so far, losing four and drawing the other six. The Lions drew 0-0 at Harrogate on Boxing Day, but before that they had won their previous two league games, 1-0 against Leamington and 3-0 away at Stockport County.

They were knocked out of the FA Trophy by Chorley a couple of weeks ago. Guiseley’s top scorer Adam Boyes (12 goals)  is likely to play, while Oli Johnson is on eight for the season and is also likely to feature.

We’d like to see as many fans down at Nethermoor tomorrow to cheer on The Coasters in their quest to stay top of the Conference North table going into the new year!

We believe there will be a pitch inspection this evening due to the recent inclement weather and a further one in the morning if needed.  Look out for updates on out Twitter feed.