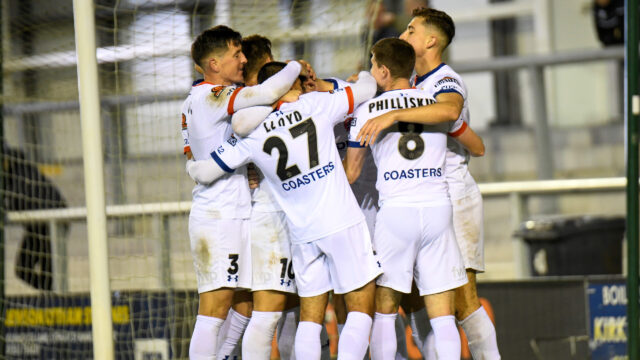 Saturday sees the Coasters on the road for the first time this month as Jim Bentley takes his side to face Curzon Ashton in the National League North.

The fixture comes at a great time for Fylde after back-to-back victories ensured the Coasters remained top of the table, four points clear of Brackley Town in second.

Both teams come into Saturday having played each other nine times competitively over the years, with Curzon picking up four wins and Fylde picking up five wins. The Coasters came out on top the last time the two clashed, securing a 4-1 win at the Tameside Stadium in 2020.

Ahead of the fixture, we take a look at things from both camps, with Curzon returning to action following a few weeks without a game, and Jim Bentley’s side full of confidence ahead of the trip.

So far this season, Curzon have enjoyed themselves in the National League North. Currently sitting in tenth place, the Nash have had a Covid hit few weeks, with cases in their squad meaning they had to postpone their last three games against Kidderminster Harriers, Telford United & Gateshead FC.

However, a return to action this weekend against the Coasters awaits The Nash and their new manager, Adam Lakeland, who is coming face-to-face with Jim Bentley for the second time this season. His old side Farsley Celtic came out on top against the Coasters, but as he inherits a new squad, it’s a fresh and different challenge for the Curzon boss.

The Nash come into the game off the back of a draw against Spennymoor Town, in which they had to come from behind to earn a point after finding themselves 2-0 down away from home.

One To Watch: Jack McKay

McKay has been one of the standout performers at the Tameside Stadium this season. The wide man, who signed for Curzon in the summer, has provided four goals for his side this term and instigated Curzon’s comeback against Spennymoor. A player who has pace to burn and will certainly be looking to cause the Coasters some problems on Saturday.

It has been a magnificent start to the 2021/22 season for Jim Bentley’s men. Sitting top of the league, four points clear, and with only one defeat to their name, with the Coasters fans are full of hope.

Two recent wins and clean sheets against Spennymoor Town & Gateshead got the Coasters back to winning ways after a first defeat of the season away at Farsley Celtic, Adam Lakeland’s former club. This time around, Bentley will be hoping to get the better of his opposition counterpart.

The Coasters have received a boost ahead of the fixture, with Danny Philliskirk returning from his one-match suspension after he was sent off against Farsley Celtic a few weeks ago, but a league rule meant he was able to feature against Spennymoor before sitting out the visit of Gateshead.

Off the pitch, Luke Burke & Liam Nolan are both making good progress with their recoveries and are pushing for a return to action in the near future.

Coach travel is still available to book in person at the Club Shop or by calling 01772 682593.
Tickets for Saturday’s fixture be bought in advance here via Curzon’s Online Ticketing Service. Curzon advises that tickets are bought in advance online, though they are available on the day.