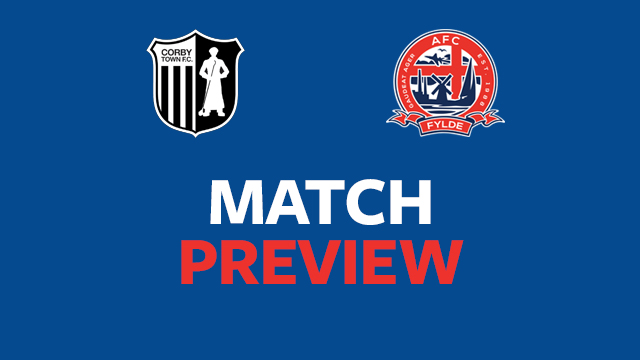 The Coasters are back in league action this weekend with a trip to struggling Corby Town.

Dave Challinor’s side are in fantastic form, having won six in a row in all competitions, the latest of which was an emphatic 9-0 FA Cup victory over Coleshill Town.

Manager Challinor will be looking to continue the form that has seen Fylde net 23 goals, and concede just twice, in the last six games as they look to close the gap on league leaders Solihull Moors.

The Coasters are just one point behind the top side and will be looking to capitalise with Solihull facing a tricky trip to Tamworth.

Hosts Corby Town have been flirting with the wrong end of the table for much of the season and are without a win in their last 10 matches.

Tommy Wright’s side currently sit 19th in the table after slumping to a 5-0 defeat at North Ferriby United last time out.

Promoted as champions last season, the Steelmen will constitute survival as success this term, however, with Fylde in red-hot form, both teams will be going all out for three points for very different reasons.

Striker Danny Rowe will be pushing for a starting spot after his hat-trick heroics against Coleshill, whilst new man James Hardy will be hoping to follow up his impressive cameo last time out with a full debut for the club.

Follow us live via the club’s official social media sites. Minute-by-minute updates will be available on our Twitter @AFCFYLDE, whilst our Facebook will have key updates and events, plus you can interact with your fellow #Coasters fans.

You can also listen on Radio Wave, who cover our games with match updates.

Our club website will bring you the full match report and reaction to the action after the game.