With a win and a draw so far in the “mini-season”, The Coasters now head to Harrogate Town in a playoff contesting clash.

Coming up against two in-form sides in Ebbsfleet and Barrow and pocketing four points shows positive signs for The Coasters.

With Leyton Orient and Salford City both wobbling on Boxing Day, the chance for the Coasters to push upwards is one that will be firmly in mind.

However, this year’s newly promoted side Harrogate Town stand in the way of that happening.

Following a 0-0 draw in front of the BT Sport cameras earlier in the season, Fylde and Harrogate go into Saturday’s game on 46 points each.

It’s fair to say that Harrogate have probably taken a few sides by surprise at the start of this season, as the newly promoted side went unbeaten for 11 games, winning seven of them.

This has given them a strong base, and their firepower in the final third has been particularly impressive. 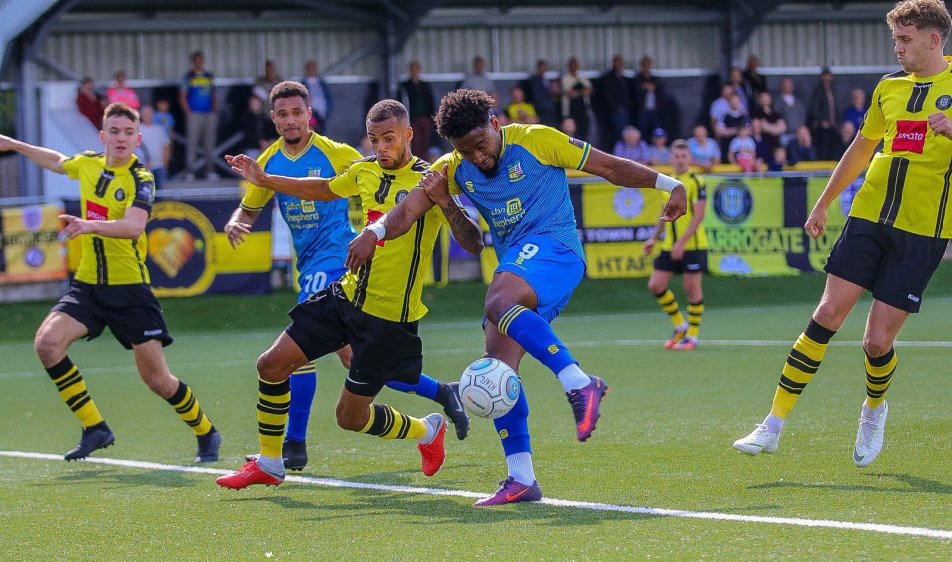 Former Coaster Jack Muldoon has notched 10 in the league already, but there have been goals shared around the side this season – so effectively in fact, that it’s made them the league’s top scorers with 51.

It’s come at somewhat of a price however, as their defensive record indicates, with Town not having kept a clean sheet in 12 games now.

They’ve conceded the joint-most goals in the top 14 of the table, with 34 shipped so far, 15 more than the Coasters.

The Coasters and Town have gone up against each other nine times before – with the Coasters boasting the superior record.

Fylde have never lost at the CNG Stadium in fact, drawing 3-3 on their last visit.

As mentioned earlier in the article, it’s former AFC Fylde striker Jack Muldoon who has been leading on the goal front this season.

Whilst Muldoon will be happy that he’s already matched his record from last year, the striker only has one goal in the last four, and would no doubt love to reignite his goalscoring against his former club.

Elsewhere, centre-back Callum Howe has a remarkable 7 goals already this year, including last time out in their loss to Halifax Town.

The towering centre-back will be a troublemaker at set-pieces, and Town will no doubt look to him to get his name on the score sheet yet again.

Speaking to the Coasters media team, manager Dave Challinor spoke of the need to utilise the full squad in the congested run of fixtures.

Following the somewhat unforeseen mauling of Salford by Wrexham, it will be interesting to see how the two teams react.

Elsewhere, there will be three teams that have seen their manager depart this week in action, as Maidstone, Barnet and Chesterfield all return to action.

Chesterfield will see what life after Martin Allen has in store for them when they host Hartlepool United.