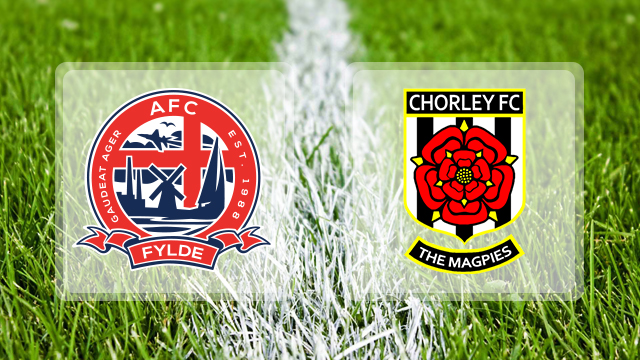 Second placed AFC Fylde travel to eighth placed Chorley in the Vanarama Conference North on Saturday looking to make it two wins in succession on the road.

The Coasters got back to winning ways last Saturday with an impressive 4-1 victory away at Leamington, and that means that Fylde sit three points behind Barrow who are top of the league, although The Coasters have a superior goal difference.

Next up this Saturday it’s a local derby against Chorley for The Coasters. Historically, this game is at the forefront of both teams minds as the two sides have met on a number of occasions in lower leagues.

The previous game this season between these two sides ended 3-1 to Chorley at the end of January in an unfortunate defeat for the Coasters, so Challinor’s men will be looking to make amends this Saturday at Victory Park.

The Coasters hadn’t won for three games before the Leamington Victory on Saturday, and they’ll be looking to add a second win in a row on the road before a tough midweek trip down to Worcester City next Tuesday night.

Chorley sit 8th in the league table on 53 points from 32 games, 7 points off the play-off positions. Their previous game was a 3-2 defeat away at Bradford Park Avenue on Wednesday night, but before that game they were unbeaten in four games, drawing three and winning 1-0 away at Brackley Town.

Interestingly, Chorley’s last home win was on January 24th, a 4-1 victory against Gainsborough. The Magpies have drawn their last three league games at Victory Park against Oxford City, Worcester City and Leamington.

Historically, Chorley tend to win against Fylde at Kellamergh Park while The Coasters often manage to pick up three points against The Magpies at Victory Park.

Free for Under 8’s