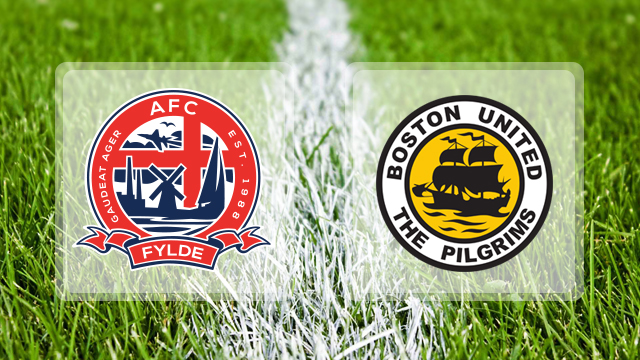 AFC Fylde’s next game is an away trip to Boston United this Saturday as The Coasters look to close the gap on top of the table Solihull Moors with a seventh victory of the season (3pm KO).

The Coasters travel to The Jakeman’s Stadium having had a great start to the season and they find themselves in a familiar league position of second in the table, having amassed twenty points from their opening ten fixtures. Fylde go into this game on the back of two home games in the past week, collecting a point against Tamworth before a comfortable 4-0 victory over FC United of Manchester on Tuesday evening.

Summer signing Sam Finley put The Coasters ahead in the first half against FCUM, before The Red’s keeper Carnell was dismissed for a foul on Matty Hughes which led to the second goal from Richie Baker as he scored the resulting free-kick. Further goals from top scorer Dion Charles, who now has five goals in the league, along with a Danny Rowe goal late on saw Fylde take all three points at Kellamergh Park.

Fylde have taken ten points from their last five games with wins coming against Curzon Ashton, Gloucester City and most recently, FC United as well as a home draw with Tamworth. In fact, The Coasters have scored thirteen goals in their previous five league games and have won five of their last seven games.

Boston on the other hand sit eleventh in the National North league table on thirteen points from their opening ten fixtures, having won four with one draw and five losses. They have taken just four points from their previous five games, although their latest result was a 3-2 away win over Corby Town on Wednesday evening, with top scorer Dayle Southwell grabbing a brace & Scott Garner grabbed a late winner.

These two sides have only faced each other twice in previous history, with one win for each side at home. The first meeting of the two saw The Coasters travel to Boston in November 2014, where a brace from Carl Piergianni saw a 3-1 home win in favour of the former Football League side. It was a completely different story when The Pilgrims travelled to the Fylde Coast in February however, as The Coasters ran out 3-0 winners thanks to goals from Danny Lloyd, a Mark Jones own goal and a late strike from Richie Allen.

Minute by minute updates will be available up to the second on Twitter, while Facebook will have key updates and events plus you can interact with your fellow #Coasters fans.
Video previews and post-match interviews are available on You Tube and images will be also be added to our Instagram page so there is no excuse to miss out on the action, wherever you are!

You can also listen on Radio Wave and Radio Lancashire who cover our game with match updates.