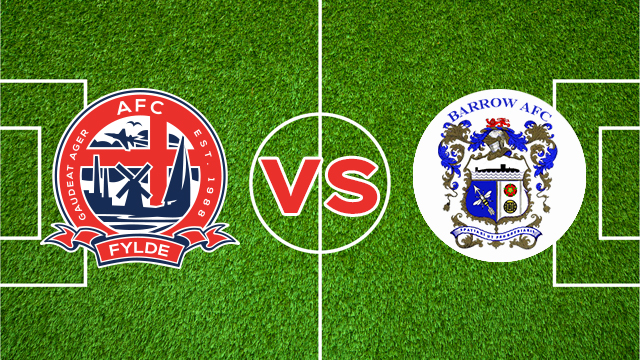 AFC Fylde go into their top of the table clash at home to Barrow in the Vanarama Conference North on the back of four successive victories in league and cup action and on a run of eight games unbeaten in all competitions.

It’s been a great December for The Coasters so far as wins against Stalybridge Celtic in the league and Gainsborough Trinity in the FA Trophy, both by the same score line were followed by a 3-1 home league win against Leamington and most recently, a 2-0 win away at Brackley last Saturday hanks to goals from Danny Rowe & Danny Lloyd.

The Coasters occupy second place in the Conference North table going into their game with Barrow – the first of two fixtures between the two sides in the space of one week – and the first one is a top of the table crunch match, with the winners taking top spot in the league table.

Both Fylde and Barrow have played 20 games, but Barrow have won one more game than The Coasters and so sit two points clear at the top of the table. A win for Fylde would see them go top, while a win for Barrow would see The Bluebirds go five points clear. The only team to have won more games this season that AFC Fylde are Barrow although The Coasters have a better goal difference than their opposition in two days time by a difference of 10.

The Christmas/New Year schedule has turned out to be vastly important for The Coasters this year, as the two games after the game against Barrow on Boxing Day are away at Guiseley, who are currently third in the league table before travelling to Barrow on New Year’s Day.

Last season, Barrow finished 11th on 56 points but this campaign has seen the takeover of the club by an American millionaire which has seen them able to bring in some very good players at this level, so a win for The Coasters against an opposition such as Barrow would be huge.

Barrow have lost two of their previous four games in all competitions, with both losses coming away from home. Their most recent result was a 1-0 home win against Boston United last Saturday.

Caspar Hughes looks to shake off a knock he picked up against Brackley last week for Fylde, whilst Barrow should have top scorers Andy Cook and Jason Walker available.

We’d like to see as many fans down at Kellamergh Park on Boxing Day to cheer on The Coasters in their quest to return to the top of the Conference North league table!