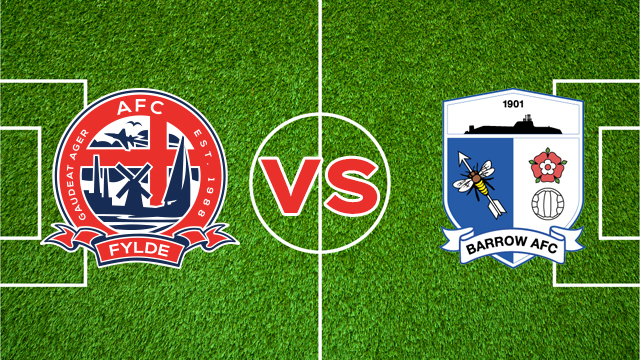 AFC Fylde go into their away game on New Years Day away at Barrow top of the Vanarama Conference North table despite playing a game less than their opponents, who sit second.

Due to poor weather conditions, The Coasters didn’t play on the 28th December at Guiseley, and Barrow only picked up a point that day, so The Coasters go into this game top on goal difference.

It was a great December for The Coasters as wins against Stalybridge Celtic, Gainsborough Trinity, Leamington, Brackley and most recently Barrow on Boxing Day saw Fylde win all five of their games that month.

The game between Fylde and Barrow is the second fixture between these two sides in less than a week. Fylde won the game at Kellamergh Park 3-2 courtesy of goals from Joe Booth, Danny Lloyd and a Richie Allen penalty.

The Coasters have only lost one of their last 18 league games, so will go into this game full of confidence that they can extend the gap at the top of the league to three points.

Josh Wilson has turned his loan deal from Halifax into a permanent deal, and providing he can shake off a knock while saw him sit out of the previous game against Barrow on Boxing Day, he is in line to start. However, a similar Coasters side to the one that beat Barrow just less than a week ago is likely.

The address for Barrow’s Holker Street stadium is:

We’d like to see as many fans up at Barrow to cheer on The Coasters in their quest to stay top of the Conference North table going into the new year!