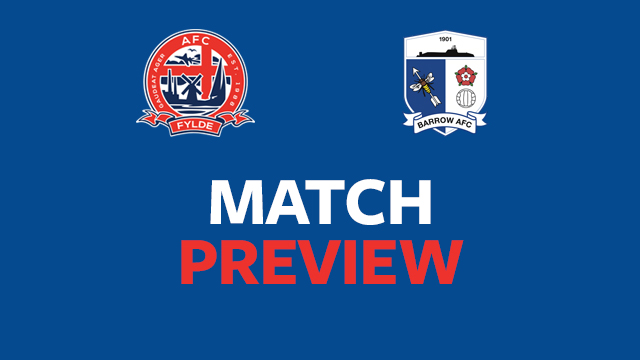 The wait is almost over…

AFC Fylde’s eagerly-anticipated FA Cup match-up with Barrow AFC is almost upon us and excitement is certainly building amongst the supporters.

And who could blame them. The Coasters go into the game on the back of seven consecutive victories in all competitions and as new league leaders.

A 1-0 victory over Stockport and an emphatic 9-0 win over Coleshill Town has seen Dave Challinor’s side reach the final qualifying round of the competition – just one step from the first round proper.

Barrow – league rivals with the Coasters last season – begin their FA Cup campaign on Saturday, having only entered at this stage.

The hosts did the double over Barrow last season and will be hoping for another victory at the weekend as they go in search of a third first round proper appearance in four years.

>There will be NO segregation at the match. Turnstiles open from 1pm. Fullers bar, offering a selection of alcoholic and non-alcoholic beverages, and the snack bar, serving local homemade food, will both be open from 1pm.

>Limited car parking is available at the ground on a first come first served basis. Surrounding roads will be coned off and there is no parking on the main road approaching the ground.

>Grab your new replica shirt and other merchandise at the club shop, also open from 1pm on a matchday.

>Pick up a match programme on sale inside the ground. The 48-page edition is just £2 and includes an exclusive player interviews, plus many other exciting features on both AFC Fylde and our visitors. Also available is the match day 50/50 which is growing in value by the week and gives you the chance to win a big cash prize!