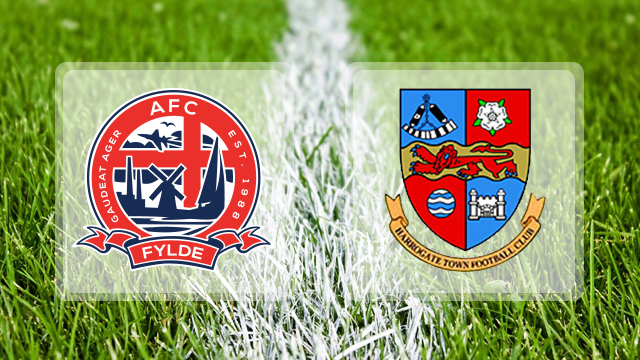 Second placed AFC Fylde travel to Harrogate Town on Saturday afternoon looking to get back to the top of the Conference North league table with an away victory.

The Coasters are just two points behind top of the table Barrow and a win for Fylde could take the back to the top of the Conference North league table if Barrow slip up at home to Tamworth.

Fylde have been a good form of late and are unbeaten in their last eight games in the league, winning four and drawing four. Last time out, they picked up three points away at Bradford Park Avenue thanks to a goal from Danny Lloyd.

April has been a good month so far for The Coasters, picking up seven points from the past three games with that win over BPA and another win over Colwyn Bay – the 6-2 thumping at Kellamergh Park on Easter Monday.

That result put Fylde top for twenty-four hours, but Barrow won on Tuesday night to reclaim top spot. This means that Fylde are still two points behind Barrow.

Harrogate Town recent results have seen them win just one of their previous six games, a 4-1 victory against North Ferriby, meaning they sit in 13th place with 52 points from their 40 games this season.

However, in the previous game this season between the two sides at Kellamergh Park, Harrogate took all three points thanks to a 2-1 victory on Valentines Day, and since then, Town have picked up four wins from their ten games, with three losses and three draws.

£12 Standing, £13 Sitting for Adults Admittance to this game is:

Your support has been exceptional so far this season and we’d love to see it continue by coming along to support the lads once again.