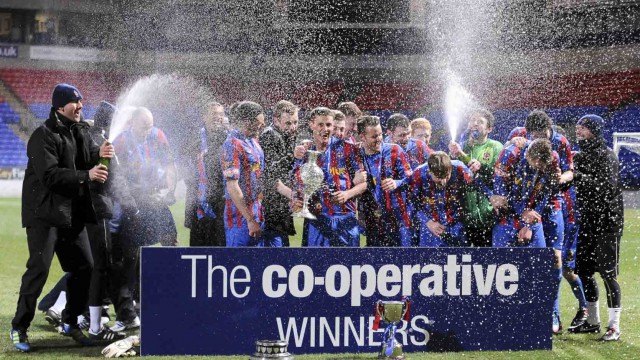 Holders AFC Fylde comfortably won through to the Quarter Finals of the Lancashire FA Challenge Trophy courtesy of a 4-0 win over Daisy Hill.

The North West Counties Division One side had no answer to a very strong Coasters side that had a full strength team named for this tie.

An own goal from Craig Flowers started the scoring after 13 minutes and goals from Danny Lloyd and Bradley Barnes had made it 3-0 by half time.

Andy Russell added a fourth just before the hour before the visitors’ Simon Farrell had a couple of late chances for a consolation.

Barnes thought he’d scored the first goal after just seven minutes but he was denied it for a foul on Daisies keeper Steven Whittle in the build-up, then Russell shot narrowly wide from eight yards after some good footwork from Lloyd to set him up.

But it was a cross from the opposite side of the pitch which led to the opener – Luke Denson sending the ball towards the near post which cannoned off Flowers and into the net with 13 minutes gone.

On this form it wouldn’t be long before the home side had doubled their lead, but they had to wait until the 28th minute for that to happen – despite both Lloyd and Harry Winter hitting the woodwork.

After threatening on a number of occasions, Whittle had no chance in stopping a thunderous strike on the edge of the box from Lloyd after he was fed by Russell through the middle and it was 2-0.

Mark Winslade couldn’t find a way past Whittle though nine eight minutes later but Barnes could three minutes before the break, rounding the keeper and slotting home for Fylde’s third.

It was more of the same from The Coasters throughout the second half with Daisy Hill hardly getting a sniff of the ball.

Winslade and Harry Winter squandered further efforts before Fylde’s fourth came via Russell on 59 minutes – Booth’s curling corner found Russell leaping highest at the back post and he nestled the ball into the net with his head.

Lee Green almost capitalised on a mistake from Matty Hughes breaking on half way but Ben Hinchliffe was there to save his shot and a possible goal for Daisy Hill.

The final 20 minutes continued to be all Fylde looking for a fifth but Barnes, Jake Gregory and Joey Mullen couldn’t convert Lloyd’s cross into the box before Ryan Charnley shot over the bar after being set up by Winsalde.

With eight minutes left, Russell almost had a second but saw his header cleared off the line before Farrell missed to good chances for a late consolation for the visitors, missing a header before shooting straight at Hinchliffe.

Fylde boss, Dave Challinor said after the game: “We started with as strong a side as we could from the players we had available as I felt it was a good chance to go and get the bad performance from Saturday out of our system.

“However, this competition gives us an opportunity to have a look at the young lads and we’re very aware that it’s a massive step up from where they’ve been playing to our sort of level and I think Saturday showed that.

“So, it is difficult to throw them in but we know they can do jobs and they’ve done well, but they’re not quite ready yet for our league level if you like just yet.

“But for the three that came on it’s a great experience for them but this year, and possibly next, it’s more a developmental process for them.

“Overall, the game was certainly one way traffic and the disappointing thing for us was that we were sloppy in the final third and we missed endless chances.

“But for us it was more a case of doing the right things, moving the ball and creating the opportunities. But it was a comfortable performance with a lot of possession and we came through the game with no more injuries.”

The Coasters now wait to find out who they will meet in the draw for the next round but before that game there it’s back to league action with the visit of Frickley Athletic on Saturday.