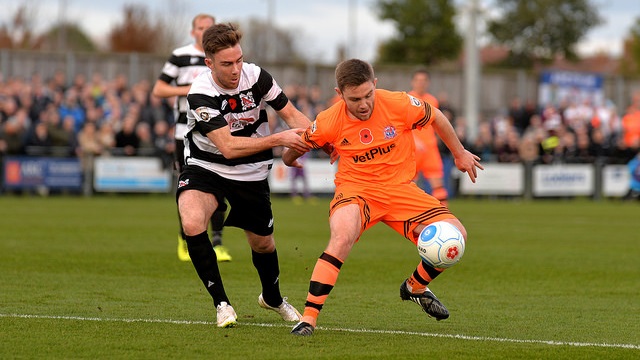 The Coasters maintained their four point lead over the hosts and Challinor was happy to come away with a share of the spoils.

“It’s a good point and to see it through in the second half took a big effort. We caused our own problems because we know that they are a big threat from set pieces. We gave them at least fifteen free-kicks and corners in the second half and you can’t afford to do that.

“The referee didn’t give us the free-kicks that we gave them and that ultimately put us under pressure. We didn’t control momentum in the second half, similarly to the game against Stockport when we nicked it with a last-minute goal. However, to see it out and get a point could be a massive one for us.

“We knew it was a big opportunity for us. They probably came into the game knowing that they couldn’t afford to lose really. We were in a bit of a different situation in that we had a four-point cushion.

“They’ve changed their system and matched us up a little bit and got runners going. Credit to them, they stopped us getting out but we’ve got to be more experienced and be able to control the momentum of the game. It’s a tough place to come and the result maintains our lead over them.”