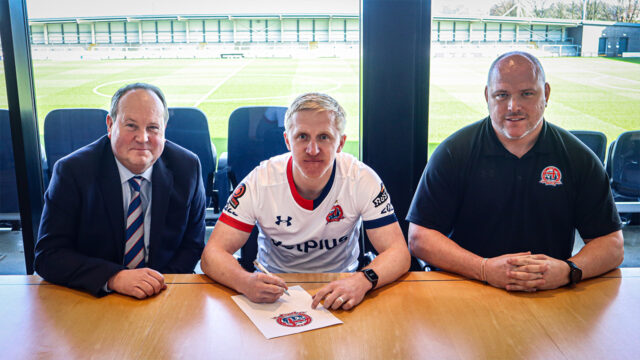 Mark joins the Coasters on a free transfer from Hartlepool and signs an 18-month deal at Mill Farm, which takes him to the summer of 2023.

Cullen has played in each of the top five divisions of the English Football League system and scored on his full debut for Hull in the Premier League, also finding the net on a regular basis with the clubs he has served in the Football League.

After beginning his career at Newcastle United in their Academy, Cullen moved to Hull City, where he graduated into their first team after scoring 27 goals in the youth team. He made his debut Premier League debut in the 2009-2010 season.

Loan spells at Bradford City, Bury and Stockport County led to Cullen signing for Luton Town. He went on to have a successful spell at Kenilworth Road, where he scored 21 goals in 71 appearances.

Cullen went on to sign for local neighbours Blackpool and spent four years at Bloomfield Road, where again he scored 21 goals but this time in 89 appearances for the Seasiders and left as the Club’s longest-serving player at the time.

Since leaving Blackpool, Mark has played again at EFL level for Port Vale and Hartlepool.

On Mark joining the Club, manager Jim Bentley said: “Mark is a player I’ve known about for quite a few years, and I have tried to sign him on a few occasions in the past.

“Mark’s got good experience at the higher level and is an out and out goalscorer. It’s no secret that we’ve been searching for a centre forward, and in Mark, I think we have got ourselves a very good player.

“He lives locally, he was keen to come to the club, and hopefully, he will get us plenty of goals that will help us finish the season strongly.”