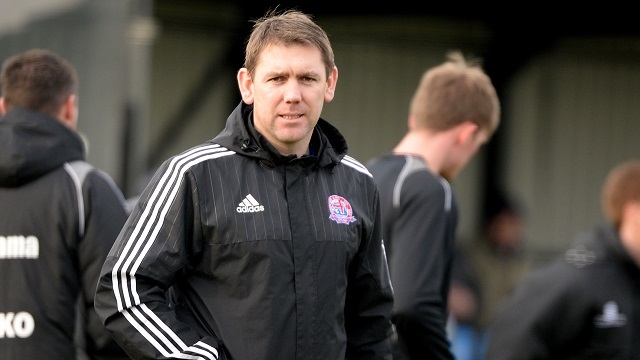 AFC Fylde manager Dave Challinor insists his side must stop conceding ‘cheap’ goals as they prepare to take on Stalybridge Celtic in the National League North tomorrow.

The Coasters ran out 5-0 winners at Kellamergh Park in the reverse fixture earlier in the season but Challinor believes it will be a very different match at Bower Fold.

“Stalybridge are in decent form so it won’t be easy,” said Challinor. “They beat Boston last weekend and that was a great result and they were only narrowly beaten by Harrogate on Tuesday. They have played two teams at the top of the division and competed well with both of them.

“We need to deal with our own issues before we think about anyone else. Not that they are major issues but we can’t keep conceding the goals that we do. We keep giving ourselves a mountain to climb by giving away cheap goals.

“Stalybridge like to get the ball forward. They are dangerous from set-pieces and long throws and we have to deal with that.

“The reverse fixture came at a good time for us as they had just played a few days earlier. This is a completely different game, different time of the year, different conditions and we need to be right at it.”

The Coasters boss has just one injury concern ahead of this weekend with full-back Caspar Hughes facing a late fitness test.

“Caspar missed Tuesday night with a groin problem so we will have to see how he is. At this point he is probably 50/50 for the weekend. On the plus side we have Josh Langley coming back into the squad after his suspension.

“We are actively looking at new players all the time but we aren’t going to bring someone in for the sake of it. We want people who can improve the squad and not just make up numbers.”