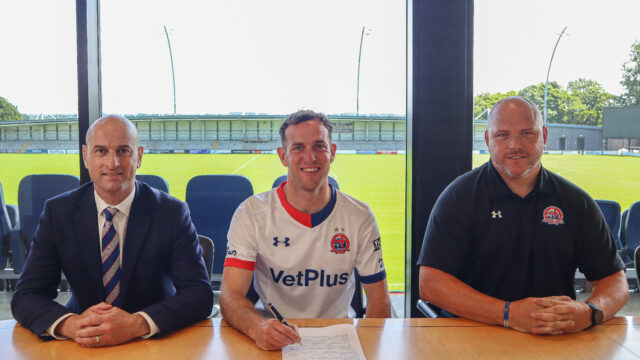 AFC Fylde are delighted to announce the signing of experienced midfielder Luke Joyce, following the expiration of his contract at Port Vale.

The 33-year-old has put pen to paper on a one-year deal at Mill Farm, with the option of a further year in the Club’s favor.

Joyce – who is our fourth summer signing following the arrivals of Stephen Dobbie, Bobby Jones, and Nathan Shaw – joins the Club after three years at Port Vale, racking up a total of 131 appearances in all competitions for the League Two outfit. The deep-lying midfielder has enjoyed a fruitful career since progressing through Wigan Athletic’s youth system, arriving with 598 games worth of Football League experience.

His professional footballing journey began at The Latics, where he made his first-team debut in January 2006 as an 18-year-old, coming on as an extra-time sub against Leeds United in the FA Cup third round.

Since then, Joyce has gone on to play for the likes of Carlisle United and Accrington Stanley over the course of 15 years, captaining the latter until his departure in 2015.

On the signing, Jim Bentley told afcfylde.co.uk: “This is a real big signing for the Football Club. Luke has proven to be one of the best midfielders in League Two over many seasons.

“His stats are phenomenal, he’s an excellent professional and is very well respected within the game. I’m really pleased to have him on board and I’m sure the AFC Fylde supporters will enjoy watching him play this coming season.”