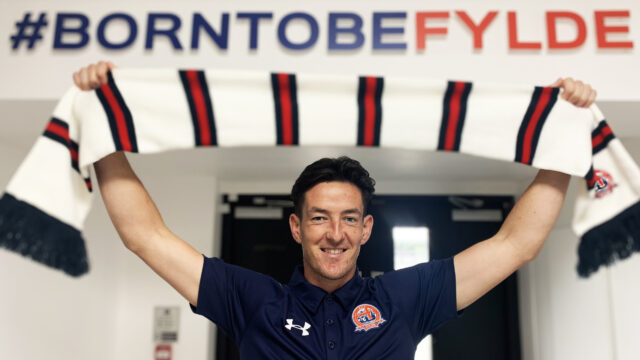 We are delighted to announce the signing of 25-year-old left-back, Luke Conlan.

The defender joins from Morecambe FC for an undisclosed fee, on a one-year contract with a further-year option in the club’s favour.

Born in Portaferry, Northern Ireland, Conlan was schooled in Premier League side, Burnley’s academy. He was a regular throughout the age groups with his national side, representing Northern Ireland at U16, U17, U19 and U21 level on multiple occasions.

Going out on-loan to SPL side St Mirren allowed the full-back to get his first experiences of the professional game, before a loan at Morecambe under Jim Bentley’s guidance swiftly followed.

That move was made permanent in 2016 and with over 100 EFL appearances under his belt, the majority of which were under Bentley’s tutelage, Conlan adds experience and quality at a good age to an already impressive defence at Mill Farm.

Speaking to afcfylde.co.uk after joining the club, our latest addition said: “I’ve had a good relationship with Jim over the years, so that’s the main reason for me. I heard of the interest recently and it was all about playing games, so knowing the Gaffer and how he works, seeing the facilities here, it all seemed a great fit for me.

“I already know this is an environment I will enjoy. Adding the players that they have and the experience to an already good squad, it looks like things are going really well. We should be pushing for promotion and I want to be part of that.”

Landing yet another impressive signing with experience at a higher level, Jim Bentley told afcfylde.co.uk just how happy he was with the latest bit of business, saying: “Luke is obviously a player I know very well from my time at Morecambe. I think it’s fair to say he improved year on year and is now a good, solid, modern day left back.

Luke Conlan has signed up for 20/21, now you can! CLICK HERE to buy your season ticket today.