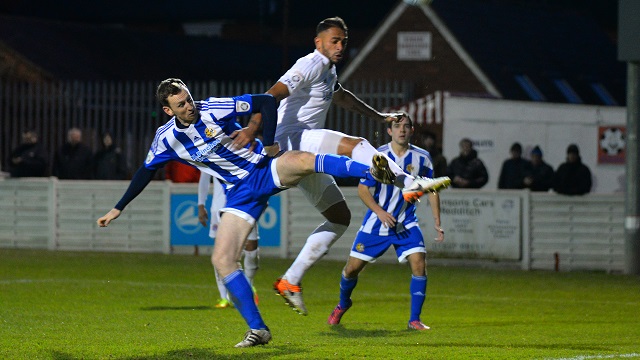 “Luck on our side” – Williams

AFC Fylde defender Steve Williams believes the Coasters have luck on their side this season after securing a narrow 2-1 victory over Worcester City at the weekend.

The Coasters came under heavy pressure from the hosts in the second half at the Victoria Ground, but held on to move seven points clear at the top of the National League North.

Star striker Danny Rowe was again the match winner with both goals – the first of which was his 100th for the club – and Williams was pleased that his defence stood strong.

“We are always pleased to win, however it may come about. We went there with one objective and that was to get all three points.

“We made it difficult for ourselves at times, particularly in the second half, but we managed to see it through and that was pleasing.

“As a defender you sometimes think the worst and in the back of my mind I was concerned that they may get one back towards the end. We knew if we kept plugging away then we would give ourselves a good chance and we seemed to get the rub of the green at times.

“They had a one-on-one towards the end and that could have quite easily been a goal, but things are going our way at the moment. We have to just keep at it.”

Williams struggled with injuries early into his Coasters career, but has enjoyed a run in the side over the last few weeks and hopes to have seen the last of any reoccurring problems.

“Whilst I have been here I‘ve had a couple of niggling injuries but that is just part and parcel of the game. It’s been good to get a run of games and hopefully that will continue for the rest of the season.

“I still don’t feel 100 per cent, but not many players go into games feeling completely fit. You just have to deal with it and manage it as an individual.”

Dave Challinor’s side switch their attention back to the FA Trophy this weekend with a home tie against Brackley Town.

Williams was on the scoresheet in a 1-1 draw against Brackley on the opening day of the season and admits it is a competition that the squad are keen to do well in.

“We all want to do well in the FA Trophy, especially after being knocked out of the FA Cup so early. It can build momentum and we see every game as important to build morale in the group. To reach the latter stages of that competition will be good for everyone involved.”