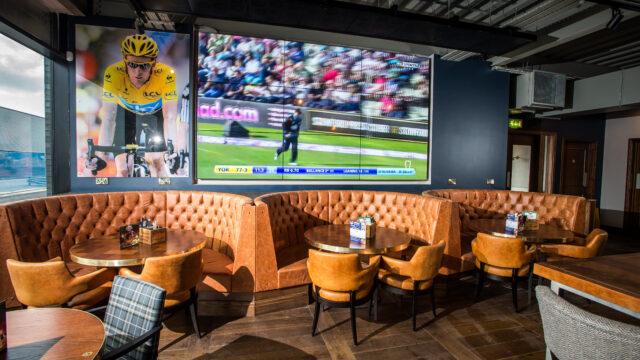 Live Sport at Bradleys This Week

Bradleys Sports Bar will be showing live sport this week, including Premier League, Champions League football, Cricket, F1 and Rugby Union just to name a few, so come and join us for some drinks this week.

After reopening fully last week for the first time since the pandemic, Bradleys has seen a fantastic number of people make their way back through the doors, and this week, Bradleys Sports Bar have a packed schedule once again.

To start the week off, England take on Sri Lanka in T20 Cricket before Everton travel to Molineux to take on eleventh placed Wolves on Monday Night Football. A win for either side will push them up the table and closer to the top four, and it is set to be an exciting clash.

On Tuesday, the Champions League comes to Bradleys, as Manchester United travel to Atalanta off the back of Saturday’s 3-0 victory over Tottenham Hotspur. Chelsea are also on their travels, with Thomas Tuchel taking his side to face Malmo FF in Group H. Bayern Munich & Juventus are also in action, plus there is T20 cricket to feast your eyes upon.

Two more English teams are in action on Wednesday night as Manchester City host Club Brugge and Liverpool welcome Athletico Madrid to Anfield for entertaining fixtures under the lights. Gillette Soccer Special will also be shown on both Tuesday & Wednesday to keep you up to date with the latest scores around the leagues.

Rangers take a trip to Denmark to face Brondby IF, in the hope of moving into a qualification spot in Group A, while Celtic look to move into qualification contention when they take on Ferencvaros.

The heat starts getting turned up as the weekend approaches. F1 Qualifying gets underway in Mexico before Southampton and Aston Villa kick the weekend’s football.

It’s the Manchester derby on Saturday, as Pep Guardiola & Ole Gunnar Solskjaer face off when Manchester City make the short trip to Old Trafford. Then, as Coasters supporters return from Curzon Ashton, Bradleys will be showing a whole range of sports, including F1, Cricket and the evening Premier League fixture, with high-flying Brighton taking on the struggling Newcastle United.

The week’s action is rounded off with some Masters Golf from Portugal before two tasty Premier League fixtures, as Arsenal host Watford and in-form West Ham welcome Jurgen Klopp’s Liverpool to the London Stadium. There is also Scottish football, FA Cup action, Rugby Union and F1 Qualifying being shown.

It is certainly an action-packed week and one you don’t want to miss out on, so come and join us in Bradleys for a few drinks and some thrilling sports action.