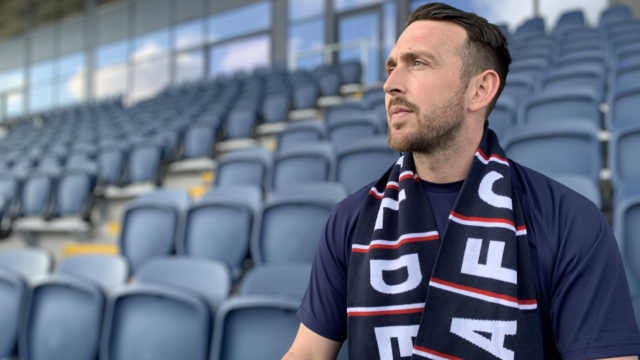 Josh Lillis has spoken exclusively to afcfylde.co.uk after joining on loan until the end of the 2019/20 Vanarama National League season, hoping he can change the fortune of the club.

Lillis has arrived from Sky Bet League One side Rochdale AFC, in a move he sees as “the right fit” for himself.

Lillis said: “It was an opportunity that arose quite quickly, I spoke to the manager Jim, who I know as he’s good friends with my father. It’s the right fit for me. I’ve had a tough season at Rochdale, not playing, I felt myself out of the fold and thought it’d be a good decision for me to go out on loan. I’ve had it quite hard, a lot of clubs already had plans in place for the season so it was just kind of a waiting game. This arose, and with 12 games left, it’s the perfect fit for me to come and get some games.”

Lillis arrives with an abundance of experience in the professional game, having been exposed to all kind of scenarios in his 16 years of professional football. Joining the Coasters with a real battle on his hands, he has stated he “likes the fight” and “I like to think that my experience will benefit the club”.

“Over the years of being a professional I’ve been through promotions and relegations, fights, you know dog fights, fighting for promotions and fighting to avoid relegation. It’s exciting to come in, it’s a fresh challenge for me and a fresh face for the lads. It’s hard being down near the bottom sometimes, and a good fresh face with different feelings coming into games is beneficial. I like to think that my experience will benefit the club, I’ll try my utmost to get amongst the lads and help them, use all my experience to help and push them the right way and hopefully we can get out of this.”

For Lillis, AFC Fylde is ideal being fairly local and somewhat familiarised with some of the faces at the club.

Lillis told us: “I live towards Burnley way so it’s not far just up the M65, so as I said before it’s just a good fit. I also know a few of the boys, obviously played with Jordan Williams in the past two years for Rochdale and Neill Byrne was at Rochdale for a spell. Then there’s a few familiar faces that I’ve played against over the years, a few lads I’ve faced in my career, they’re a great bunch of lads.”

We got to know our newest recruit as Lillis has told us what the fans can expect from him as a player. It is always a tough explanation for a goalkeeper, but the ‘keeper has showcased a communicative personality which can benefit Fylde.

“I like to think that you’ll probably see an all-round game from me. Hopefully a slight improvement in results and that I can have a big say in that. Again, I’ll rely on my experience to talk to the lads position wise. Sometimes, you can have a good game without doing too much as long as you know you’ve organised correctly so I’m just hoping that I can change be part of this group and help to change the recent fortune of the club.”