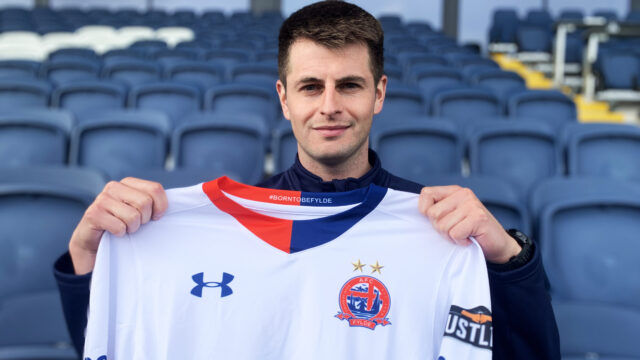 We are delighted to announce the signing of 26-year-old central midfielder, Liam Nolan.

The 6ft 3’ former Northern Ireland U21 international has signed for the Coasters, following his release from Macclesfield Town, a club whom he had joined in September this year.

Arriving at Mill Farm as Jim Bentley’s latest signing, Nolan will bring stature and experience to the heart of the midfield area, adding his presence to an already strong and exciting part of the pitch alongside Danny Philliskirk and David Perkins.

Starting his career with Premier League side, Everton the now 26-year-old has the pedigree and background of being schooled at the highest level. Following his departure from Goodison Park, Nolan headed to Crewe Alexandra, where he would become a valuable member of the first team.

From Gresty Road, it was then a move over to Accrington Stanley for the Liverpudlian. It was the perfect move at the time as he was instrumental in Stanley’s promotion as champions from Sky Bet League Two, into League One. Remaining at the Wham Stadium and playing in League One, a new challenge did then arise for the midfielder as he joined Salford City on loan. Once again, he played a part in a promotion winning season, for the Ammies this time during 2018/19.

Last season saw Nolan play for Halifax Town. No longer a stranger to what it takes to earn promotion, the midfielder did his upmost to try and add another but it wasn’t to be as the Shaymen would lose out in the play-offs during 2019/20.

Now joining the ranks at Mill Farm, the winning mentality and desire for promotion played a major factor for both parties in the recruitment process of another talented player.

Nolan told afcfylde.co.uk: “As soon as I spoke to the gaffer I wanted to be here. I obviously know he did a brilliant job at Morecambe, so as soon as I spoke to him and he showed me around the facilities – which are brilliant – and I know a few lads who have been here a while, I thought what a good club it is, so I’m just delighted we’ve got it done.”

Jim Bentley told afcfylde.co.uk: “He’s a player I’ve seen a lot of in the past, especially his time at Accrington Stanley when they won League Two. He’s done well since, having a pretty successful time at Halifax last year, so we like him as a player. He’s different to what we’ve got and he’s adaptable as he can also fill in at the back line, he gives us extra height and is good with the football. He’s a good character and footballer, so we’re pleased to have him on board.

“I must also mention his desire to get back up the pyramid and play in the league. He was in training with us a few weeks ago and we really liked him, but then Macclesfield came in for him and he made the decision to go there, purely for the footballing level they were playing at. We respected that decision, but with the devastating news about Macclesfield it now means he’s available again and we are really pleased he’s chosen to come here.”