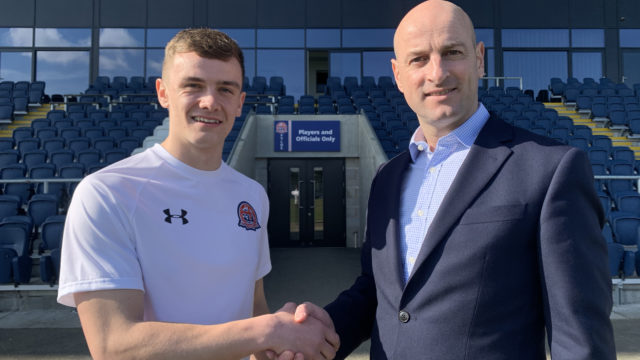 Defender arrives on loan from Blackburn Rovers until the end of the season.

AFC Fylde is pleased to announce the signing of 20-year-old left-back Lewis Thompson, on a loan deal from Sky Bet Championship side, Blackburn Rovers.

Thompson is highly-rated having joined Rovers from Manchester United, coming to Mill Farm in search of further experience within the game whilst also bolstering Jim Bentley’s options in a key area.

The full-back has spent time on loan with FC United of Manchester during the 2018/19 season, whilst also being called up to represent both England and Northern Ireland at various youth levels.

Upon joining the club, Thompson said: “It all came quite suddenly, I only got the call yesterday! I think it’s a brilliant opportunity, obviously the club is near the bottom but I think that for me I have to embrace the challenge and learn as a player. I am looking forward to helping the lads fight for points, that’s important for me instead of playing Under 23s football, so I am really happy to be here.”

Jim Bentley told afcfylde.co.uk he was pleased to secure the signing.

He said: “We’re looking at all areas and we needed to strengthen at left-back. We’ve brought Lewis as we’ve spoken to the guys we know at Blackburn and they rate him highly, we’ve also seen him play and were impressed. He’s had a spell with FC United of Manchester last season so he ticks a lot of boxes. He’s energetic, he can get up and down and is robust so we’re pleased to have him here.”