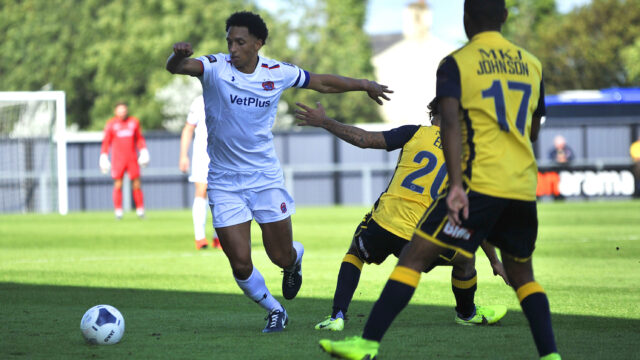 AFC Fylde can confirm that Lewis Montrose will leave Mill Farm at the end of his contract.

The popular midfielder will join Kidderminster Harriers FC, departing after three years on the Fylde Coast.

Montrose joined in the summer of 2017 and was instrumental in a run that saw his side reach the National League play-off places during the 2017/18 campaign. The team would ultimately miss out on a chance of promotion following defeat to Boreham Wood, but after 48 appearances from the heart of midfield, Montrose had played a huge role in an exciting campaign.

The following two season’s would see Montrose help the Coasters to two Wembley finals, winning one and losing one. He recalls the ‘history making’ FA Trophy victory over Leyton Orient as an incredible day and achievement, whilst also looking back fondly on another successful season despite the disappointment of losing the play-off final to Salford City.

Montrose’s final season saw the club struggle, but he remains adamant that his side would have stayed in the division with recent momentum on our side.

You can read a message to the fans from Lewis, by CLICKING HERE.

Everyone at AFC Fylde would like to thank Lewis for his professionalism and leadership both on and off the pitch, whilst also wishing him well for his future career with Kidderminster.