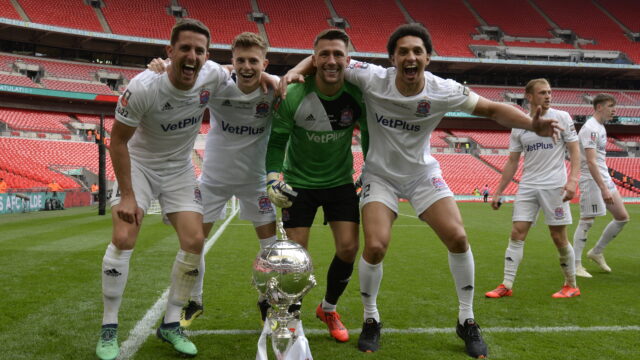 Lewis Montrose | A Message To Everyone

As it has now been announced that I am leaving the club, I wanted to send a message out to everyone to say thank you for having me at Mill Farm, I have really enjoyed my time at AFC Fylde.

During my time here I have made some friends for life, I have had some great teammates and worked with some great people who I now consider close friends of mine. I want to say a big thank you to Dave Challinor who brought me to the club and gave me the opportunity to play here, along with all of his staff.

As well as Chally, it has been great to work with Jim Bentley and his team as well, both manager’s have really helped me and I will remember them well.

There are so many people I would like to thank personally but under the circumstances I can’t go and see everyone and say bye, but please do understand that there are some great people at this club. Behind-the-scenes so many want to help and that’s from the guys in the office to the chefs, we’re always well looked after.

My time at Fylde has seen some highs and some lows as it has with any club. Getting to Wembley twice in one season and being able to make history as the only team to win the FA Vase and FA Trophy is something we will never forget as players and you won’t forget as fans. This season didn’t go to plan but I do truly believe that we would have got out of the fight at the bottom and stayed up, things had just started to turn and we had real belief.

I now move on to a new challenge with Kidderminster, who are an exciting and big club at their level. They have some good history in cups and have been in the Football League before so it is a challenge I can’t wait to be involved in. I know Russell Penn really well, he is a big reason as to why I have chosen to join, as we have played together before and I know what he wants from me.

During this hard time we’re all going through, I want to send my best wishes to everyone’s loved ones. I am fortunate and happy to say that my family have been well so I really hope yours are too. Keep safe and hopefully we can all get football back very soon.

Thanks for the memories and best of luck for the future, Coasters.