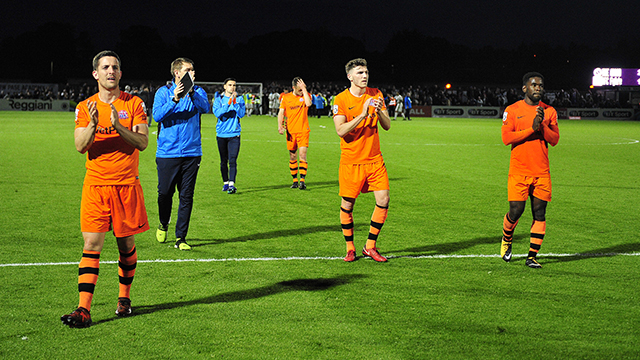 The Coasters’ sensational season came to an abrupt end in North London, however Challinor hopes his side use that pain as motivation for future success.

“We had a real go, throughout the season and last week against Boreham Wood. Every single one of the lads gave everything they had and that’s all I can ask of them.

“There is a niggling feeling of regret because of the poor goals that we conceded but to have even been in that position in the first place is huge testament to what we have done.

“Experiences, good or bad, have to be learnt from and that will be the case for us.

“I think it is important when you have lost big games to watch the other team celebrate. It should drive the lads on and hopefully makes them more hungry for success.

“There is no better way of getting promoted than through the play-offs, but there is also no worse way of a season ending than defeat at this stage.

“Our season has ended but it’s not the end of the world. Hopefully it will make us more motivated to evolve during the summer and right any wrongs from this season.

“It is only going to get tougher with the teams coming into the division but there should be a lot of belief in our dressing room and throughout the club and the fans that we are more than good enough to compete.”