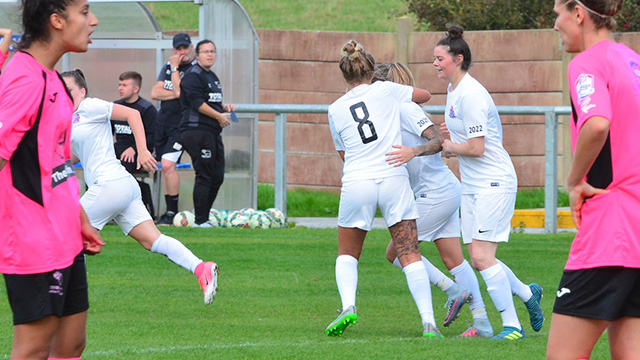 Fylde Ladies continued their unbeaten start to the new FA Women’s Premier League season with a 1-1 draw against Derby County.

A tight contest saw both goals arrive in the final five minutes as Fylde star Lagan Makin cancelled out Camilla Newton’s opener to earn a share of the spoils.

Fylde Ladies went into Sunday’s home game on the back on 10-0 cup victory and took full control of proceedings during the opening stages, stringing together numerous opportunities with dangerous balls in behind.

On 11 minutes, Derby’s Andi Bell found herself through on goal but her shot was well saved by goalkeeper Alex Brooks to keep the scores level.

The Coasters could not make their dominance pay and went in at the break on level terms but came out in the second-half with added purpose. Fylde manager Conrad Prendergast made two changes at the half-way point, introducing Eve Kennerley and Makin with hope of making a breakthrough.

As the second-half wore on, the Ewe Rams began to assert themselves on the game with Bell again forcing a good save from Brooks when through on goal.

Fylde had their fair share of opportunities too, substitute Natasha Flint going closest immediately after entering the fray with a vicious strike from 18 yards that whistled narrowly over the bar.

The deadlock was finally broken as full-time approached when the pace and trickery of Bell saw her sneak into the box, before squaring to Newton who fired her effort home.

However there was still time for late drama when a dangerous ball found Makin, who turned the ball home from an acute angle to earn a point for her side. Her sixth goal in two games for the Ladies side.

Manager Prendergast admitted he was frustrated to drop points but pleased to keep the unbeaten run going: “I cannot deny that both myself and players are disappointed with only earning a point.

“We have a squad full of quality and ability, but we only demonstrated that in brief spells. The players have to take responsibility because at times there was a lack of hunger, determination and a desire to win for 80 minutes. It shouldn’t take the opposition scoring to light that spark and change our mindset.

“Moving forward, we have to raise our game. This includes myself, the staff and most importantly the players.

“Looking at the situation from a positive perspective, we are still unbeaten and performances like that should help us to progress and improve but it is important that we do not just talk about it, we must act on it.”