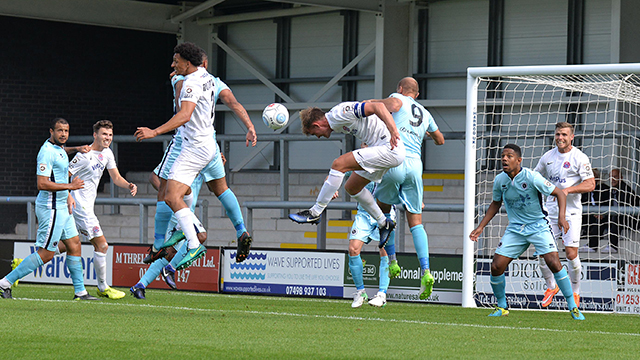 Langley keen to learn from opener

AFC Fylde captain Josh Langley admits that his side will have to adapt quickly to life in the National League after Saturday’s season opener.

The Coasters were held to a 2-2 draw at Mill Farm by Boreham Wood in their first game in the fifth tier of English football.

Five summer signings made their debut on Saturday and whilst Langley was satisfied with the result, the defender believes it was a wake-up call for the Coasters.

Langley said: “I think on the whole we were happy with the result because Boreham Wood are a good team. We looked a little nervy but we grew into the game.

“It was our first game at this level and it was at home so there was a bit of pressure on us and I think it showed at times.

“After doing so well last year, we knew it was going to be difficult to replicate that this season and I think we have found that out straight away.

“The two goals we conceded were very similar. Two crosses to the back post and their lads just wanted the ball more. But we will take the point and move on to the Chester game.”

Debutant Jonny Smith, who joined the Coasters on Friday from Bristol City, was the hero for Fylde netting a stunning equaliser to earn a valuable point and Langley was impressed with the youngster, along with fellow substitute Henry Jones.

Langley said: “Jonny had only trained with us once but the signs are very good from him and I definitely think he improves our squad. Henry is a clever player, but it was a tricky game and we couldn’t get him on the ball as much as we would have liked. However, they both made an impact when they came on and got us back into the game.

“I think incident with Henry at the end was a definite penalty and if it gets given then we win the game.”

Fylde travel to Chester tomorrow evening for the first away trip of the new campaign and Langley has his sights set on maximum points: “It’s another difficult game, as they all will be. There will be a decent crowd on and we are really looking forward to it but we are also looking for all three points.”