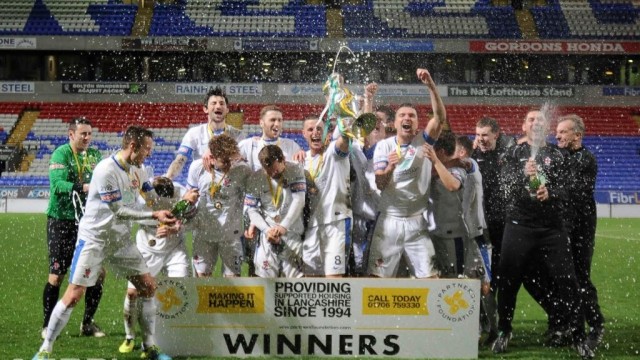 The Lancashire FA Challenge Trophy gets underway later this month and the draw for the First Round has been made.

As expected, AFC Fylde have been given a bye to the Second Round as the holders and also one of the higher ‘ranked’ teams in the competition alongside eight other clubs.

A total of 23 teams will take part in this season’s competition making it one of the most hotly contested county cups in the country and with the majority of the games being local derbies it is a great way to visit local clubs that you don’t generally get to see on a weekly basis.

Fylde have the unenviable record of winning this competition three times in the last four years but have a long way to go before they match the total that rivals Chorley have amassed over the years.

However, if Fylde were to be successful once again at the now renamed Macron Stadium in March 2015, they would be first team to win the competition three consecutive times since 1944.

This is a competition which has become synonymous with success for AFC Fylde in recent years and has been a great way for youngsters to gain valuable First Team experience.

Last season was no exception with Jake Gregory, Ryan Charnley, Joey Mullen and Ben Duffield all making impressive appearances in this competition and being a part of the successful Fylde side that won it once again.

So whoever The Coasters draw in the next round make sure you come along and show your support for the lads whether it’s home or away and hopefully there will be more celebrations in a few months time!