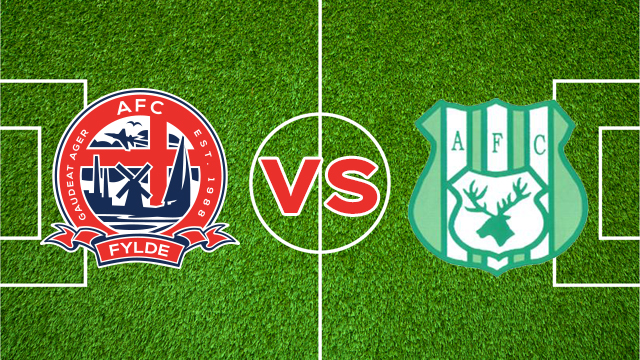 The Coasters go into their Lancashire FA Trophy Second Round home clash with Holker Old Boys on Tuesday on the back of a narrow 2-0 defeat in the FA Cup away at Plymouth Argyle on Saturday but the Coasters performance was better than the scoreline suggested.

Last season, The Coasters won this competition by beating Chorley 4-1 at Bolton’s Reebok (now Macron) Stadium in mid March, and this Tuesday will see the start of The Coasters defence of their crown.

Previous to the two recent defeats, The Coasters had won 13 of their previous 14 games in all competitions which made them the form team in Europe at the time. The Coasters will definitely want to start winning again on Tuesday when they face Holker Old Boys in the Lancashire Cup.

Last season, Fylde beat Daisy Hill 4-0, Nelson 3-2 and Bamber Bridge 2-0 before the win in the final against local rivals Chorley and the season before that saw The Coasters also win this competition so they will be looking to retain the title for the third consecutive season.

The Stags currently sit ninth in the North West Counties League Division One having amassed 19 points from 12 games so far but they have a fair number of games in hand over the teams around them.

Holker beat Irlam on Saturday 2-0 at home thanks to goals from Jamie Pattinson and Brad Hubbold but their two previous results before the Irlam game were defeats against Atherton Laburnum Rovers and Biship Auckland.

These two sides have met before on a few of occasions, and this one is set to be a good game with both sides wanting to progress as far in this competition as possible.

We’d like to see as many Coasters fans at the game as possible, so come down and cheers the lads on in their quest to retain the Lancashire FA Trophy!