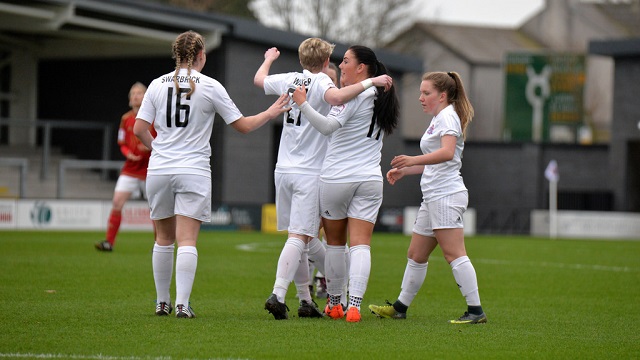 Laura Walker scored only goal of the game in the first half as Fylde moved up to third in the FA Women’s Premier League table.

Prendergast made four changes to the side that drew 2-2 with Huddersfield Town last time out with Danielle Young back after suspension whilst Olivia Wild, Kim Turner and Yasmine Swarbrick were also drafted in.

After a lively start, the Coasters were ahead after just five minutes. A cross from Young on the right wasn’t gathered by Aja Aguirre in the Forest goal, and after her first effort was blocked on the line, Walker stabbed home the rebound.

The hosts continued to pile on the pressure and Swarbrick hit the post with a powerful header on the quarter-hour mark. Swarbrick was denied by the woodwork once more moments later – Olivia Wilkes whipped in a cross and the striker’s header rattled against the crossbar.

Swarbrick was looking a real threat for the home side and only a good save from the Forest stopper prevented her from poking home from Wilkes’ superb through ball shortly before the break.

The visitors began to grow into the game after the break, but it was Fylde who still looked the most likely. Wilkes almost unintentionally found the top corner with a deep cross before Young was denied by the keeper.

Clear-cut chances were at a premium but substitute Leah Foster should have sealed the win five minutes from time when she was played clean through by Hannah Forster, however the outstanding stopper was quick off her line to make a fine save.

The missed opportunity could have proved costly when a deep Forest cross into the area cause havoc and Katie Bell saw her effort from six yards out crash back against the bar.

The Coasters saw out the remained of the game and Prendergast was pleased to seal his first win in charge: “I’m happy to get a first win under my belts. We should have got more from my first two games in charge. It wasn’t a convincing win but a win nevertheless so we are happy to take it.

“Defensively we were outstanding again, but going forward we need to pose more of a threat.

“I think the girls have a tendency to switch off in some situations as the game goes on. We’ve got to make sure that doesn’t happen.

“I am looking for players that can step up and understand how to see a game out. It’s not just about telling each other their jobs, it’s about helping each other out as a team.

“That said, to keep a clean sheet was pleasing and there were certainly some very positive signs for the future. The girls have worked tremendously hard since I came in and hopefully we can continue to improve.”