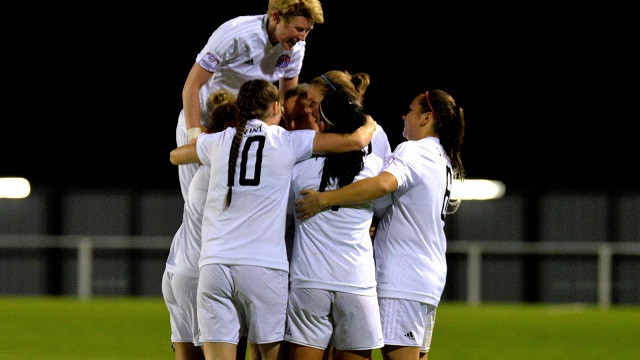 The ladies team have struggled to rediscover their early season form however their first win in seven league attempts propelled the Coasters up into third in the table.

Joint caretaker managers Kim Turner and Charlotte Farrell made three changes to side that drew 0-0 with Derby County a month ago. Danielle Brown, Jenna Carroll and Danielle Young were replaced by Tash Ronald, Vicky Westerman and Katie Anderton.

Anderton’s attempted cross from the right in the third minute was blocked, but her second attempt found Yasmine Swarbrick waiting in the middle, although her glancing header fell wide of the goal. A minute later, Anderton went it alone with a first time shot from the edge of the penalty area that flew over the top.

The Coasters had the ball in the back of the net in the 9th minute when Swarbrick headed home, but the linesman was quick to rule out the goal for offside.

Charlie Evans came inches away from taking the lead for the visitors with a lopping shot from 25 yards-out, but her effort rebounded off the crossbar and whilst it dropped for Kate Mallin, she somehow missed the target from inside the six-yard box.

Fylde deservedly opened the scoring shortly before the half-hour mark, Anderton’s spectacular volley from the edge of the Huddersfield penalty area leaving the goalkeeper with no chance.

Coasters goalkeeper Ronald denied ex-Coasters striker Emily Heckler in a one-on-one situation to prevent an immediate response from the visitors.

Alice Forshaw doubled the lead for the Coasters just ten minutes later. Anderton fired goalwards and her volley this time dropped to Forshaw to tap home from close range.

The hosts’ advantage was extended further still when Hannah Forster smashed the ball in off the crossbar from the edge of the area two minutes before the half-time whistle.

The second-half continued in the same vein and the lead was soon four. A cross from the right was eventually poked over the line by Swarbrick, despite the best efforts of the visitor’s defence to clear the danger.

On 72 minutes, the Coasters made it five as Forster was given time to shoot from the edge of the area and the ball looped over Laura Carter in the Huddersfield goal and into the left corner of the goal.

The visitors pulled one back with 12 minutes left on the clock, Mallin capitalising on an error at the back to slot the ball to the right of Ronald and into the back of the net. Heckler then had two opportunities from corners to find the Coasters net but both headers flew wide of the mark.

Anderton put the icing on the cake inside the final ten minutes when she acrobatically met an inch perfect cross from Swarbrick down the right flank to finish with aplomb.