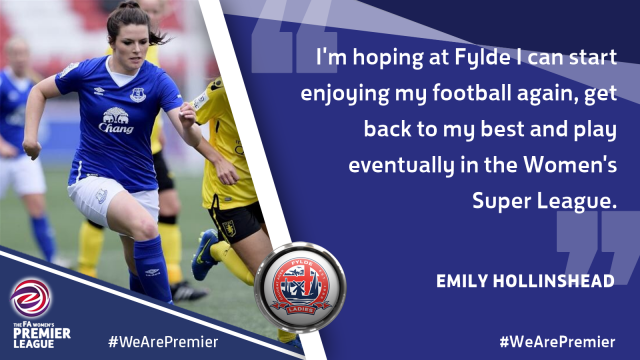 The 22-year-old, originally from Nantwich, began her footballing career at the Crewe Alexandra Centre of Excellence at the age of eight before moving to the Manchester United C of E and then Everton Ladies.

Hollinshead, who was called up for the Welsh national team for the UEFA Women’s Euro 2017 qualifying matches making her debut against Bosnia and Herzegovina, joined Sheffield in the summer.

The winger has spent the last four years studying teaching in Manchester, but has taken a break from her studies to concentrate on football with Fylde.

“I wasn’t enjoying juggling my studies and football anymore. Whilst on my placement with university, it was very difficult to train and do my best with teaching so I took a little time out.

“Conrad (Prendergast) got in touch with me and I was shown around the facilities at Fylde, which are fantastic. They’re also an extremely ambitious club, which I like, and hopefully next season we will be in the Women’s Super League. That is the standard I want to be playing at.

“I also know quite a lot of the girls already at Fylde which is nice. I’ve played with Lauren Davies at Everton and Liv Fuller at Manchester United.”

Despite Sunday’s narrow 1-0 defeat against Derby County, Hollinshead said: “Although I was disappointed with the result it was great to be playing again, hopefully next week against West Albion we can get three points.”