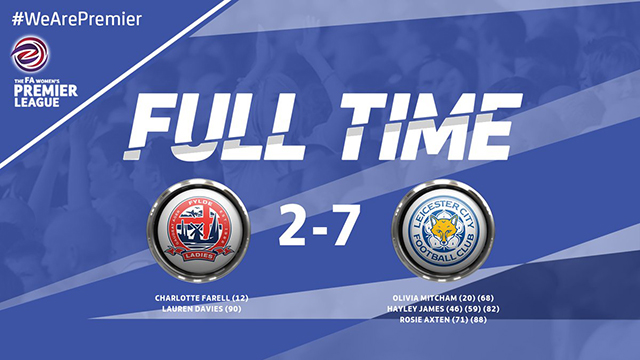 Fylde Ladies’ unbeaten start to the Women’s Premier League season came to an abrupt end this weekend after sobering 7-2 defeat against Leicester City.

Despite heading into the match with six players missing through injury, Fylde took the lead however a disastrous second-half saw the visitors run riot.

In bitterly cold conditions, the game started at a surprisingly quick pace with some excellent play from both sides.

Fylde went close in the opening stages earning themselves a corner following some good work, however Jenna Carroll’s header flew just wide of the post.

However, the lead did not last long with Leicester breaking quickly with a long free-kick that caused confusion before being flicked into the back of the net by Olivia Mitcham.

Fylde winger Leah Foster tested Clarke on the stroke of half-time as the sides headed in at the break on level terms.

Leicester took the initiative after the interval and were ahead within a minute of the restart when a break down the right found Hayley James in behind with her tame shot sneaking under the dive of the keeper.

James had her scored and Leicester’s third just before the hour, this time poking home unmarked from a corner, before Mitcham doubled her tally soon after.

Fylde were struggling against the long ball tactic of Leicester and gave the visitors a chance to put the game to bed when Fylde keeper Alex Brooks gave away a penalty that Rosie Axten duly dispatched to make it five.

Fylde’s miserable half continued as captain Danielle Young was brought off with injury and minutes later the home side were forced to to play with ten as Natasha Flint limped off.

Axten added her second before James completed her hat-trick in spectacular style to round off a disappointing afternoon for the Coasters, however there was still time for slight consolation as Lauren Davies ran through to grab a second for the hosts.