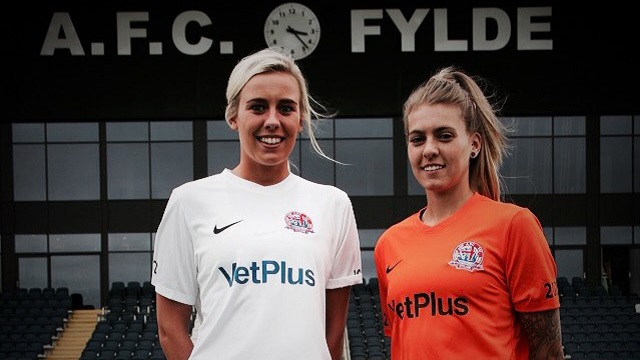 After a busy summer, Fylde Ladies set their sights on an exciting 2017/2018 Women’s Premier League campaign, kicking off against Middlesbrough later this month.

Prior to Conrad Prendergast’s side kicking a ball this pre-season, it was off the pitch where his side have attracted most attention.

Following the previous season’s underwhelming position in the league table, the new manager welcomed no less than 12 new faces to the club.

Prendergast said: “Following a very busy off-season period for myself and the coaching staff, it is clear to see that we have drastically improved the squad ahead of the new season. The moment our the 2016/17 season came to an end, we had a clear vision as to whom and what we needed to bring to the club in order for us to achieve success.”

Veatriki Sarri was the latest signing announced, the Greek International adding to a long list of new summer recruits, a number of whom join from the Women’s Super League and International squads.

Prendergast, who takes charge of the Coasters for the first league game away to Middlesbrough on the 20th August, said: “It is not just about quality for us, the players who have joined us all come from the right environments where professionalism is a must and standards are high.

“It is that type of environment that we are striving towards creating at this club. The new signings, along with the retained squad, are on the right track to achieve just that.”

So far this pre-season the Coasters have scored 15 goals in just three games, winning two and drawing one. They commenced with preparations away to Barnsley Ladies (W5- 0) and the fixture saw a host of faces wear the club colours for the first time and this continued the following week when the side delivered a convincing display against WPL Division 1 side Brighouse Town Ladies (W6-0). Next up was a thrilling 4-4 draw against Manchester City’s development squad.

Brighouse Manager Robert Mitchell commented on our side following the match, saying: “Fylde Ladies were different class today. I’d say there is a massive chance that I witnessed the future champions here.”