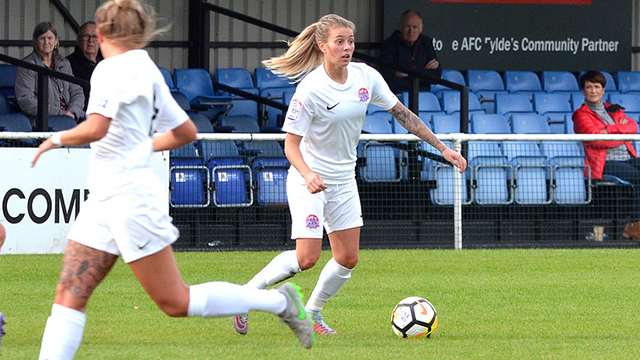 Fylde Ladies suffered quarter-final heartbreak as they were knocked out of the Lancashire County Cup by local rivals Blackburn Rovers.

Much like the men’s side the day previous, the Ladies trailed at the break to two quick-fire goals and although they pulled one back in an improved second-half display, the equaliser proved elusive.

Manager Conrad Prendergast headed into the tie with several of his first team sidelined by injury. New signing Veatriki Sarri has been ruled out for the majority of the season after rupturing her ACL whilst Danielle Lea, Olivia Wild and Char Farrell also missed the trip.

The hosts kicked off the match on the front foot and went close to breaking the deadlock early on when Rovers forward Saffron Jordan crashed an effort against the woodwork before Jess Holbrook’s low shot was blocked by the Fylde stopper.

Just past the half-hour mark, Rovers keeper Danielle Hill was forced into a fantastic save when Hannah Forster let fly from 20 yards following neat build-up play from the visitors.

After a closely-fought opening, Rovers took the lead midway through the half through Meghan Taylor and just seconds later Jordan doubled Rovers’ advantage, a lead that they held until the half-time whistle.

Fylde came out for the second half with a new lease of life and had numerous opportunities to reduce the deficit however the Rovers backline was holding strong.

The momentum shifted back in favour of the hosts which allowed Fylde to hit on the break and they took full advantage when Natasha Flint slid a brilliant ball in behind the defence for substitute Leah Foster who in turn found Lagan Makin and the forward lifted her first-time shot over the keeper.

The Coasters continued to press in the search for an equalising goal but Rovers managed the game well despite the onslaught during a nervy ending and booked their place in the last four of the competition.

Fylde midfielder Hannah Forster insisted that her side need to raise their game and their work ethic after three games without a win.

Forster said: “I think as players we need to take responsibility, not only for this weekend’s game but for the past three weeks. The work rate on the pitch has not been there.

“In this league and at this level you come up against grafters and Blackburn Rovers are a prime example of that. If we don’t work hard enough then we will get beat and that has been proved. We have simply not worked hard enough.”