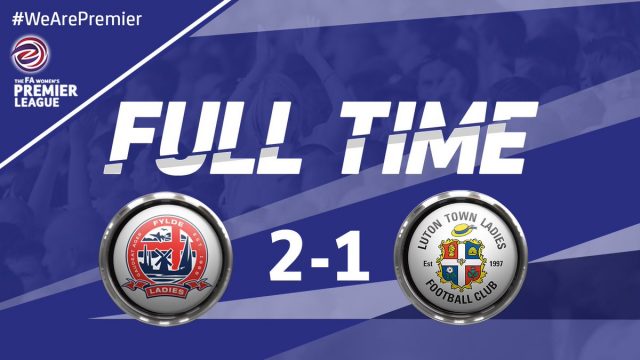 Fylde Ladies secured their place in the FAWPL Plate Final after a stunning late show against Luton Town.

Two-quick fire goals in the final 12 minutes from Olivia Wild and Alys Hinchcliffe turned the game on its head after Nicola Henman had given Luton the lead and set up a showpiece final against West Ham Ladies.

Fylde’s Jenna Carroll was handed the captain’s armband for the trip to Luton, whilst Alex Brooks was given the nod between the sicks after recently recovering from injury.

The first half was proving frustrating for the visitors, who were creating plenty of chances without ever really testing Luton stopper Kelia Hassall.

Laura Merrin tried her luck from distance early on, but Hassall was equal to her powerful effort.

Luton took until the quarter-hour mark before they fashioned their first opportunity. Natasha Fensome drove forward to the right of the Fylde penalty area and let fly with a strike that flew over the bar.

Although Fylde continued to dominate, it was the hosts that drew first blood. Brooks looked well positioned to keep out Henman’s header, however the goalkeeper slipped as she attempted to claim the ball and could only watch on in agony as it rolled over the line.

Fylde suffered an injury blow shortly after the break when Sophie Charlton had to be replaced by Hinchcliffe following a late challenge from Zara Carroll, who was booked for her troubles.

Leah Foster went close to breaking through when she nipped between two defenders inside the box, but was thwarted by a third as she looked to shoot.

Fylde’s Becky Abbott was brought on and almost made an immediate impact, whipping in a dangerous cross that was smothered by Hassall in the nick of time with Hollie Kelsh lurking.

The Coasters came agonisingly close to drawing level when Carroll’s effort was deflected into the path of Hinchcliffe who fired narrowly wide of the post.

The visitors’ hard work eventually paid dividends when they equalised with just 12 minutes to play. A corner was cleared only as far as Wild on the edge of area and the midfielder took a touch before smashing a low strike past the helpless Hassall.

The comeback was complete less than five minutes later when Hinchcliffe won the ball 20 yards out before sliding a shot out of reach of Hassall to book a place in the final against West Ham Ladies next month.

Fylde manager Conrad Prendergast said: “I thought we controlled the game throughout. We got the ball down and played some good football on a difficult pitch.

“I was delighted with the attitude of the players after going a goal down to get that equaliser and then ultimately a winner.

“I’m very proud of their performance. We went in at half time and it was quite a calm conversation really because we knew that we’d controlled the first half and we were unfortunate to be behind.

“It was a good performance all round. We shouldn’t have been in a position where we were a goal down but we did well to turn it around.”