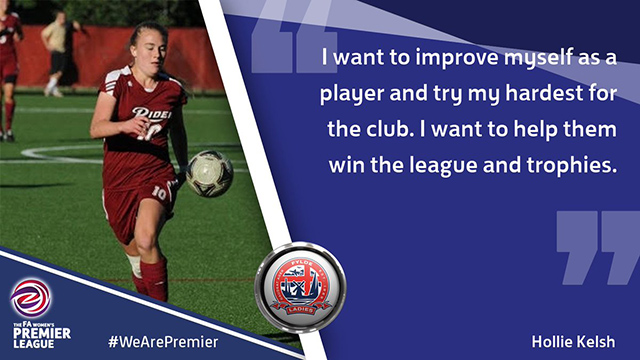 The 22-year-old returned to England this summer after four years in the United States where she studied at Rider University, representing them in Division 1 Soccer.

Ladies Ailsa Cowen spoke to our new signing after she completed the move:

Where have you previously played?

“I began playing locally for Thornton Cleveleys when I was about seven years old. Then I moved to Crewe Alex’s Academy and then Cheshire. I played for Blackburn Rovers Academy too, whilst I have also been fortunate enough to represent England at U15’s, U17’s and U19’s.”

What are you hoping to bring to the club?

Are you looking forward to starting?

“My international clearance is through, I’ve just go to wait for the league clearance now which should come through this week so I should be okay for this Sunday. I can’t wait to get started.

“My season in America finished in November I’ve done a lot of training and practicing over here to keep myself fit. I did train at Blackburn Rovers for a bit but it wasn’t what I was looking for. Then I heard about Fylde and thought I jumped at the chance.”

Fylde Ladies’ next fixture is this Sunday against Burton Albion Ladies. The FA WPL Plate game was postponed last Sunday due to a waterlogged pitch but the ladies are fired up and ready to go.