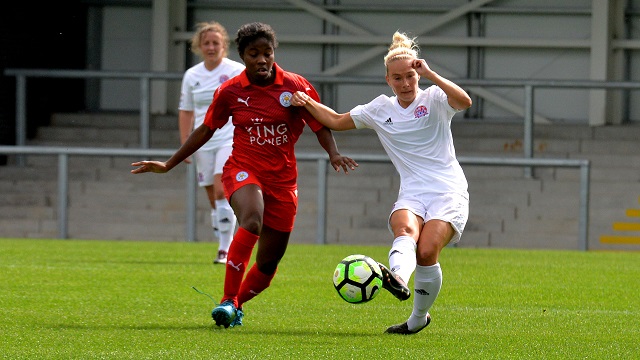 Ladies held to a draw

Fylde Ladies had to settle for a point at Riverside Pavilion after a 1-1 draw against newly-promoted Leicester City.

Coasters captain Hannah Forster opened the scoring on seven minutes but Leicester pegged them back shortly before half-time, Alex Madden picking out the top corner.

The Coasters started with real intent early on and were soon in the lead. Natasha Flint travelled down the left wing before cutting the ball back for Forster to put his strike out of the goalkeeper’s reach.

Fylde stopper Gemma Jackson pulled off an important save after Kim Farrow broke free of the Coasters defence, spreading herself well to deny the equaliser.

Farrow looked dangerous in the final third again for the Foxes, as they continued to press, firing a strike narrowly over the top, however a leveller duly arrived on 38 minutes.

Madden looped an effort over the stranded Jackson from the left side of the penalty area and into the back of the net.

Madden could have turned the game around early in the second half when she dashed through one-on-one with Jackson, but her tame shot was comfortable for the Coasters goalkeeper.

Leicester substitute Chan Robinson had only been on the pitch two minutes when her cross from the left wing found Sophie Domingo charging in at the back post, but she was denied by the quick reactions of Jackson.

On 79 minutes, Jackson was at it again blocking Robinson’s driven shot on goal and whilst the ball bounced back into the penalty area, Olivia Wilkes was on hand to clear the danger.

Substitute Lagan Makin had a perfect opportunity to find the winning goal three minutes later. Forster played the ball over the top which allowed space for Makin to take aim, but her shot was weak and the attack petered out.

The Coasters remain third in the FA Women’s Northern Premier League after picking up the point in Leicester, but have not managed a win in their last six league games.

Next up for Luke Swindlehurst’s side is a trip to third-placed Blackburn Rovers, kick off is 19:45 this Thursday evening at Bamber Bridge Football Club.