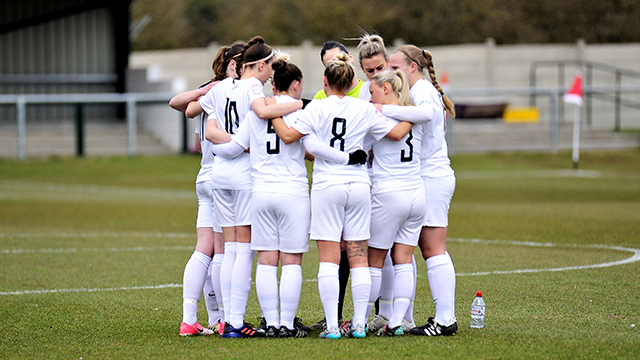 Fylde Ladies were held to a goalless draw in the Women’s Premier League by basement club Wolverhampton Women at the weekend.

Despite failing to make a breakthrough, the point lifted Fylde to sixth in the table with up to six games in hand on the teams above.

Wolves were the first to threaten inside ten minutes when Jenna Carroll conceded a dangerous freekick, receiving a yellow card for her troubles, however the kick was well wide of the mark.

Coasters new girl Alys Hinchcliffe fired a powerful effort goalwards as the hosts pressed for an opener however her strike sailed over the bar.

Midway through the half, Sophie Charlton fed Tilly Wilkes who took aim from distance only to see her shot fly just wide.

The chances kept on coming for the home side as Hinchcliffe lashed another wide. Moments later Liv Fuller whipped a cross into the box from the right that drifted narrowly wide of the far post as the half drew to a close.

The second half started much the same as the first with Wolves awarded a promising set-piece. The ball was whipped in towards Mai Butler who took a touch before firing straight at Fylde stopper Alex Brooks.

The Coasters backline were holding firm as the visitors began to press, although it remained the hosts that looked the most likely.

Manager Conrad Prendergast made a double change on the hour with Emily Hollinshead and Danielle Young introduced, the latter almost making an immediate impact when her incisive through ball was inches from picking out Charlton’s darting forward run.

Leah Foster sent a teasing cross into the box as the clock ticked on but Fylde were once again frustrated as the ball was scrambled clear.

Fylde had Brooks to thank for keeping the Wolves from the door with 15 minutes to play. A clever ball through saw Jane Cross race through on goal, however the Coasters stopper was quick off her line to deflect the ball away to safety.