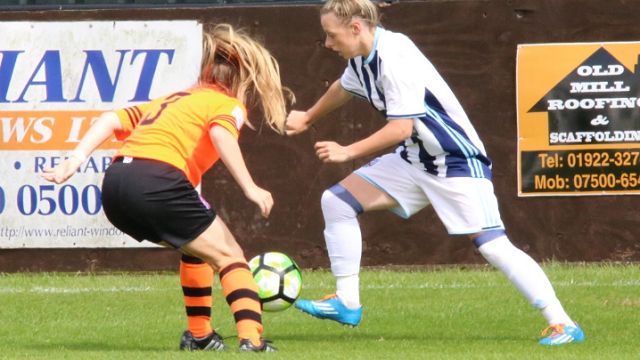 Ladies out of FA Cup

Fylde Ladies crashed out of the Women’s FA Cup after a 4-1 defeat away at West Bromwich Albion.

The home side raced into a two-goal lead inside the opening just nine minutes, before adding a third in the second half.

The Coasters pulled one back through Danielle Young, but it proved nothing more than a consolation as Albion scored a fourth and to make matters worse, Young was dismissed late on.

There were two debutants on display for the travelling side with Tash Ronald starting in goal and Olivia Rees on the wing.

It was a disastrous start as Albion took the lead after just four minutes through Leigh Dugmore who had an easy tap in following a dangerous cross from a free-kick.

A second followed five minutes later, another cross into the box found striker Abby Cottam unmarked and she had the simple task of poking home the loose ball.

Ronald made a wonderful save in added time as Cottam looked certain to make it 3-0 and effectively game over. Dugmore caused more trouble down the left wing and her cross found the head of Cottam, but Ronald dived and somehow held onto the ball, keeping her team in the game as the first half game to a close.

Caretaker manager Kim Turner, who was also a sub, was forced onto the field in the 58th minute as Emily Marsh had to be taken off injured, leaving Charlotte Farrell to lead from the bench.

Farrell changed the formation, with the Coasters leaving three at the back in attempt to dominate the midfield and it looked to be a masterstroke as the team began to get a strong foothold of the game.

However, in the 68th minute a defensive error gave Albion the chance to make it three and this time they didn’t waste their chance. Cottam again played an influential part in the goal as she won the ball in the box and fired the ball at Ronald who initially saved, but Greaves was on hand to knock it over the line.

The Coasters did eventually pull one back through Young as her cross from the corner in the 79th minute, evaded everyone and somehow found its way into the bottom corner.

But just five minutes later, Young was then sent off for an off the ball incident, leaving her team with a mountain to climb.

Three minutes from time, Cottam put the game to bed for West Brom as she grabbed her second, a tap in from Highman’s cross, confirming their place in the next round of the FA Cup.